Wombats are Australian marsupials. They are burrowing creatures and are most active at night. This page contains wombat facts, and is part of our Australian Animals series. Read on to find out more about these interesting animals…

Wombats are sturdy, burrowing marsupials that are found only in Australia.

Wombats live in large, complex tunnel-and-chamber burrows which they excavate with their powerful claws and rodent-like front teeth.

Common wombats are usually solitary and live in their own burrows, however, the other species are more social and live together in larger burrow groups. 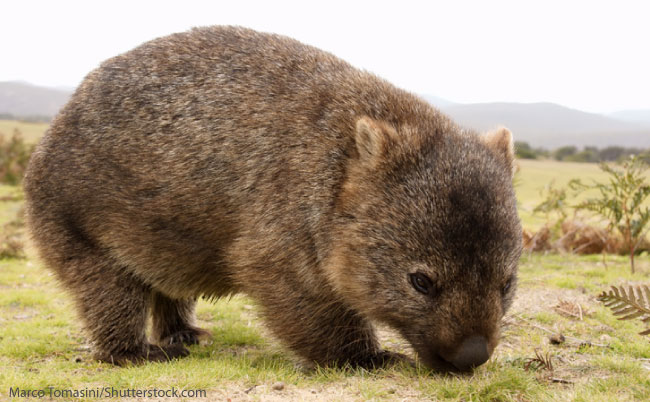 All three species are approximately 36 in (100 cm) long, 20 in high and weigh between 44 and 77 lbs (20 and 35 kg). They have short legs, a thick, muscular body with a large square head, short neck, round ears and very small eyes. Their hind-legs are longer than their fore-legs.

In body shape, wombats resemble badgers or small bears. Wombat fur can vary from gray to black or a sandy colour. The tail is short and stubby.

Being marsupials, wombats have a pouch for rearing their offspring. One distinctive characteristic of wombats is that their pouch opens backwards. This prevents soil collecting in the pouch; especially important when the female is carrying young.

Wombats are usually slow movers. However, if threatened, they can sprint up to 25 mph (40 km/h) for brief periods of around 90 seconds.

You can see what a wombat looks like in the video below:

Wombats are herbivores and nocturnal. They emerge from their burrows to eat mostly grasses, roots, herbs and bark. Their incisor teeth resemble those of rodents and grow constantly as they are adapted for gnawing on tough vegetation.

Wombats have a very slow metabolism which is an adaptation to help their survival in arid conditions. It takes around 8 to 14 days for them to complete digestion. Wombats have cube-shaped feces which they use to mark their territories; it’s thought that the unusual shape of the feces prevents them from rolling away. 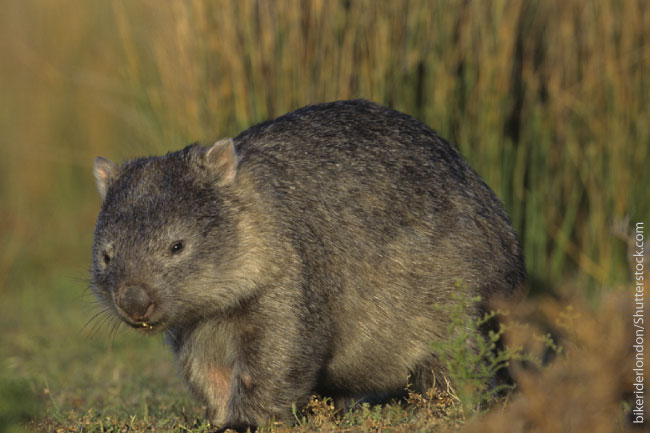 The main predators of wombats are Tasmanian devils and dingoes. Wombats initially avoid being caught by having a very tough rear hide, with most of the rump made of cartilage. This prevents teeth or claws from easily grasping the wombat. Their very short tail also makes it difficult for a predator to catch them. Wombats try to drive off attackers with two-legged kicks, like a donkey or horse. If chased, wombats dive into a nearby tunnel and use their hardened rump to block the attacker. In some cases, wombats allow the attacker to force their head over the wombat’s back, and then use their powerful legs to crush the skull of the attacker against the tunnel roof.

Female wombats have a brief gestation period of only 20 to 21 days, after which they give birth to a single, tiny, undeveloped young, usually in the spring. The youngster immediately crawls through the fur to the pouch on their mothers’ bellies and attaches to one of the 2 nipples inside. The young leaves the pouch after about 6 to 7 months, but will still frequently climb back into the pouch to suckle or when threatened. The mother weans the youngster at about 15 months. Wombats become sexually mature at about 18 months of age and can live for 5 to over 30 years.

The Northern hairy-nosed wombat is endangered due to several threats including its small population size, predation by wild dogs, competition for food with livestock and disease. They inhabit only two places one of which is home to only 138 of this species according to the latest study. The common wombat is still hunted as vermin.

We hope that you have enjoyed these wombat facts. Australia is home to many other incredible creatures: find out about more of them here: Australian Animals.

10 Things You Didn't Know About Wombats

Wombats are one of the most loved and well recognised members of the Australian Bush, however beyond the fact they eat burrows and that a male wombat “eats roots and leaves” many Australians are unaware just how weird and wonderful these subterranean marsupials really are, so in this video we share 10 Things You Didn’t Know About Wombats!
1. Wombats have square poo
Like many territorial animals around the world Wombats use their droppings are a territorial marker letting other Wombats in the area know that they are around, but while a round dropping might roll off what ever place you deposit it, square poo stays where it’s left!
2. There are actually 3 Species of Wombats
While most people know them simply as “Wombats” there are actually three distinct species found in different parts of Australia. Along the east coast of Australia and on the island of Tasmania you have the Common Wombat, also known as the Forrest Wombat or Bare Nosed Wombat while in the arid regions of South Australia and Central Queensland you have Southern Hairy Nosed Wombats and Northern Hairy Nosed Wombats
3. The Northern Hairy Nosed Wombat is listed as being Critically Endangered. Numbering only around 250 individuals the Northern Hairy Nosed Wombat is one of the most endangered mammals on earth. Once found throughout inland NSW and Central Queensland, competition with cattle, habitat loss, and introduced african buffle grass replacing their natural diet have all resulted in the Northern Hairy Nosed Wombat being restricted to two managed populations today. While the other to species of wombats are much more secure, sadly both the common wombat and southern hairy nosed wombat have still had massive reductions in their distrobutions over the last 200 years as a result of persecution and habitat loss.