Frederick Wordsworth Ward has gone down in Australian history as the quintessential bushranger. Gentlemanly, daring, and a skilled horseman and bushman, he operated under the alias of Captain Thunderbolt until his fabled death in 1870.

Born near Wilberforce in New South Wales in 1832, Fred Ward was the youngest of eleven children. At age eleven he worked as a station hand at Aberbaldie Station in New England where, presumably, he developed his love for all things equine. He spent the bulk of his adolescence working at various stations including the renowned horse stud Tocal Station. It was at this time in 1856 when a huge theft of horses and cattle was made from Tocal and surrounding stations. Teenage Ward was spotted helping his cousin John Garbutt move a mob of the stolen stock across country. This got him his first sentence of ten years hard labour at Cockatoo Island.

After four years in prison Ward earned himself a ticket of leave, an early form of parole, that allowed him to work on a farm in an allocated district. He was required to stay within the Mudgee district and attend a parole muster every three months. This was when he met the charming Mary Ann Bugg, a part-Maori woman who was married to a squatter. The marriage didn’t seem to bother the pair much as soon Mary Ann was pregnant to Ward. He decided to take her back to her father near Dungog for the birth, an unfortunate decision as not only did this require him to leave his district, it resulted in him arriving late to his muster and thus violating the ticket of leave. Moreover, in his rush to get to the muster, Ward had pinched a horse to get him there. Needless to say thus combination resulted in Ward back on Cockatoo Island, with an extra three years for the stolen horse.

During his re-internment he was informed that he had to remain imprisoned for the entire duration of the sentence (a total of seven years) with no option to obtain a ticket of leave due to new regulations. Ward was subsequently involved in a prison riot. Unwilling to ride out his sentence in penal servitude, Ward conspired with a fellow inmate, highwayman Frederick Britten, to escape. Absconding on 11 September, 1863, Ward and Britten managed to breach the prison walls and swim to Woolwich. Some claimed that Mary Ann was there to help but she was accounted for elsewhere at the time. Ward would never again see the inside of a prison.

Taking to the bush, Ward and Britten were spotted near the Big Rock outside of Uralla and set upon by police. Ward was shot in the back of the left knee as the pair escaped. Soon the pair went their own ways and Ward robbed a toll-keeper at Rutherford, calling himself Captain Thunderbolt (possibly as a homage to a British highwayman who used the same moniker).

He reunited with Mary Ann and, leaving the children with family, they hid in the bush in the North West until 1865. Ward teamed up with three other desperadoes: Thomas “The Bull” Hogan, Thomas McIntosh and John Thompson.  The gang took to robbing travellers around Uralla but in April in 1865 things fell apart. Engaging in a shoot out  at Millie, Thompson was shot and McIntyre and Hogan fled to Queensland.

Realising that he faced operating alone, Ward recruited new accomplices in Jemmy the Whisperer and Patrick Kelly. While raiding in Carroll in December, Jemmy shot and wounded a police officer. This gang did not last long and was disbanded in early 1866, whereupon Ward took Mary Ann to the Gloucester district. 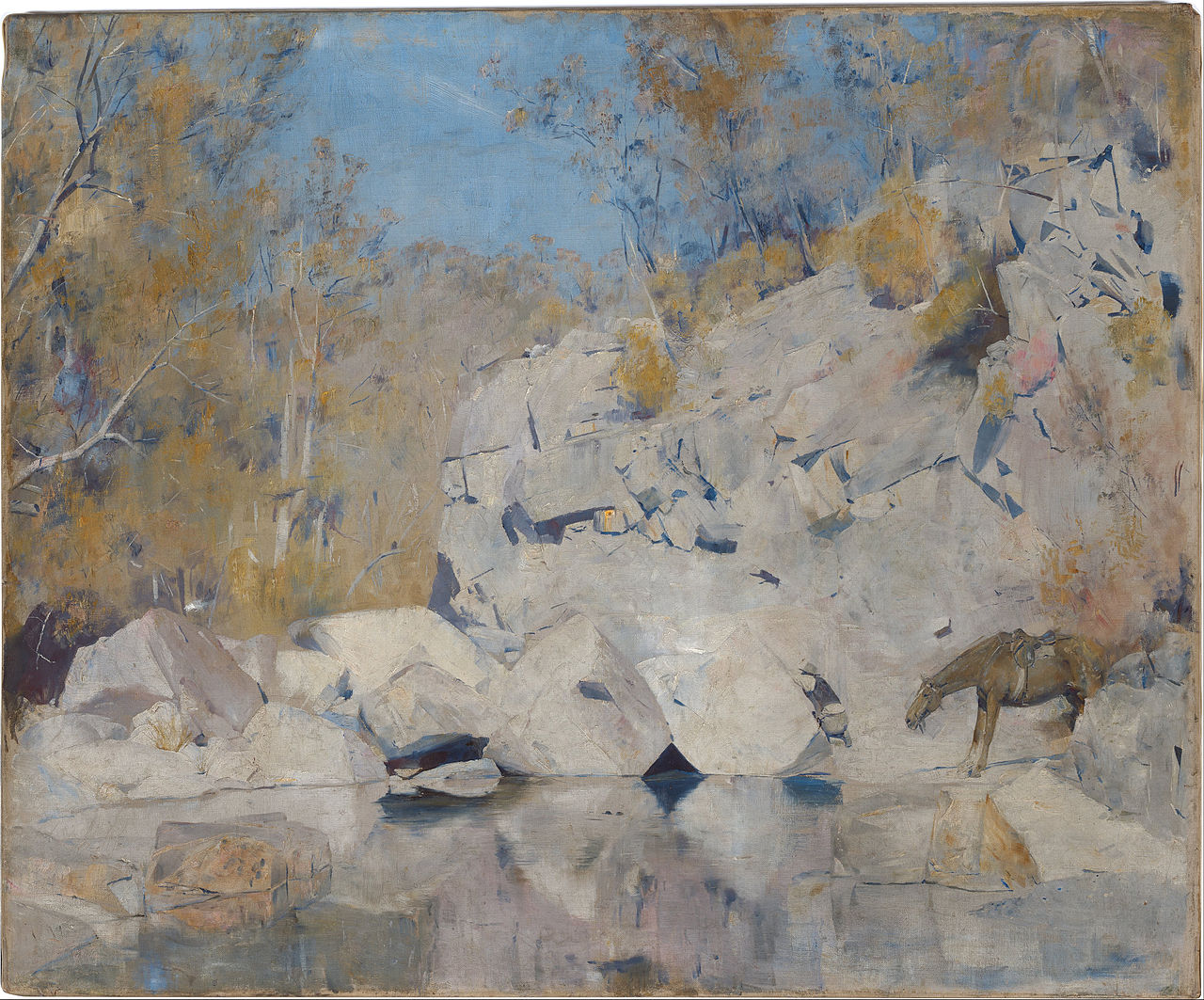 Unfortunately Mary Ann was soon arrested for vagrancy and imprisoned, but this did not deter Captain Thunderbolt. Recruiting Thomas Mason as his sidekick, Captain Thunderbolt became a name to be feared as the pair went on an epic crime spree, robbing coaches, inns and stations until Mason was nabbed in September 1867. Desperate for company, Ward took up with a part-Aboriginal woman named Louisa Mason, also known as “Yellow Long” who accompanied him on his robberies but died of pneumonia in November of 1867.

After this turn of events Ward went back to Mary Ann who was now at liberty again. Soon Mary Ann was pregnant to Ward once more and they both knew that a life on the road was not suited to her condition, so they were separated for the last time. In August 1868 Mary Ann bore Ward a son whom she named Frederick Wordsworth Ward junior.

Ward continued his epic tally of robberies during 1868, this time with a young lad named William Monckton. The pair split in December and Monckton was captured shortly after.
On May 25, 1870, Ward was spotted near an inn by two Constables. Mounting and fleeing, he was pursued by Constable Alex Walker and engaged in a riding gunfight for almost an hour. Ward’s horse was shot and he attempted to cross Kentucky Creek on foot. Walker rode into the stream, shot Ward in the chest and clubbed him with his revolver until he was unresponsive. Walker dragged Ward onto land and rode back to the inn. The next day he and his partner rode back to retrieve the body, but discovered it was gone. They soon found the corpse in the bushes where Ward had used what little life he had left to try and escape. He had died alone in the dark from the bullet wound inflicted upon him. 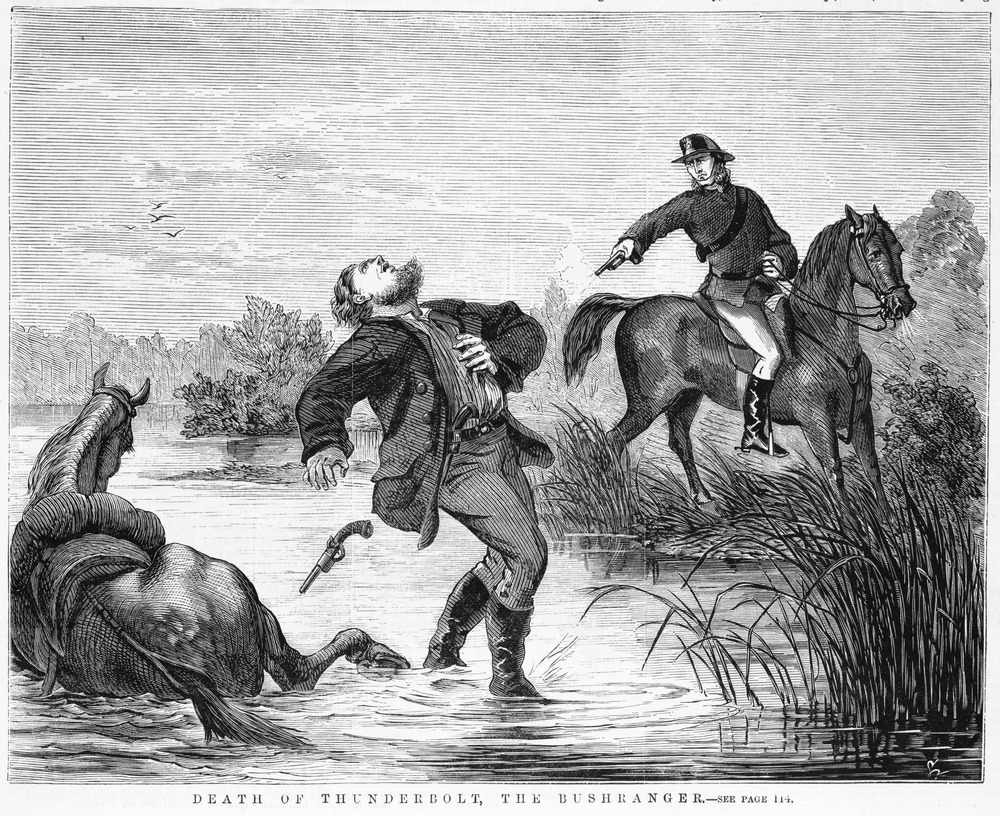 Ward’s body was taken to the coroner, he was identified and autopsied. Photographs were taken post mortem and clearly show the incision made for the autopsy. His sunken features and thin hair in the photographs portray the ravages of the life of a fugitive in the bush. In Ward’s lifeless body we see the truth of a Bushranger’s life. Not a glamorous life, but a life of harsh environments, malnutrition, no respite, social isolation and violence. While Ward never took a life, his reckless disregard resulted in a wild career of lawlessness and his inevitable, unnatural death.

The Captain and his Lady by Carol Baxter

Three years with Thunderbolt: being the narrative of William Monckton, who for three years attended the famous outlaw, Frederick Ward, better known as Captain Thunderbolt, as servant, companion and intimate friend: during which period he shared the bushranger’s crimes and perils and was twice severely wounded in encounters with the police edited by Ambrose Pratt

Captain Thunderbolt and Mary Ann Bugg : history, myth, legend and the ethical responsibility of the story teller​ by Warwick Hastie.