The period from 540 million years ago to 520 million years ago marked a seemingly overnight abundance of multicellular life forms in the world’s oceans, an event known as the Cambrian Explosion . Many of these Cambrian invertebrates, preserved in the famous Burgess Shale from Canada as well as other fossil deposits around the world, were truly striking, to the extent that paleontologists once believed they represented entirely novel (and now extinct) phyla of life. That’s no longer the accepted wisdom—it’s clear that most, if not all, Cambrian organisms were distantly related to modern mollusks and crustaceans. Still these were some of most alien-looking animals in Earth’s history. 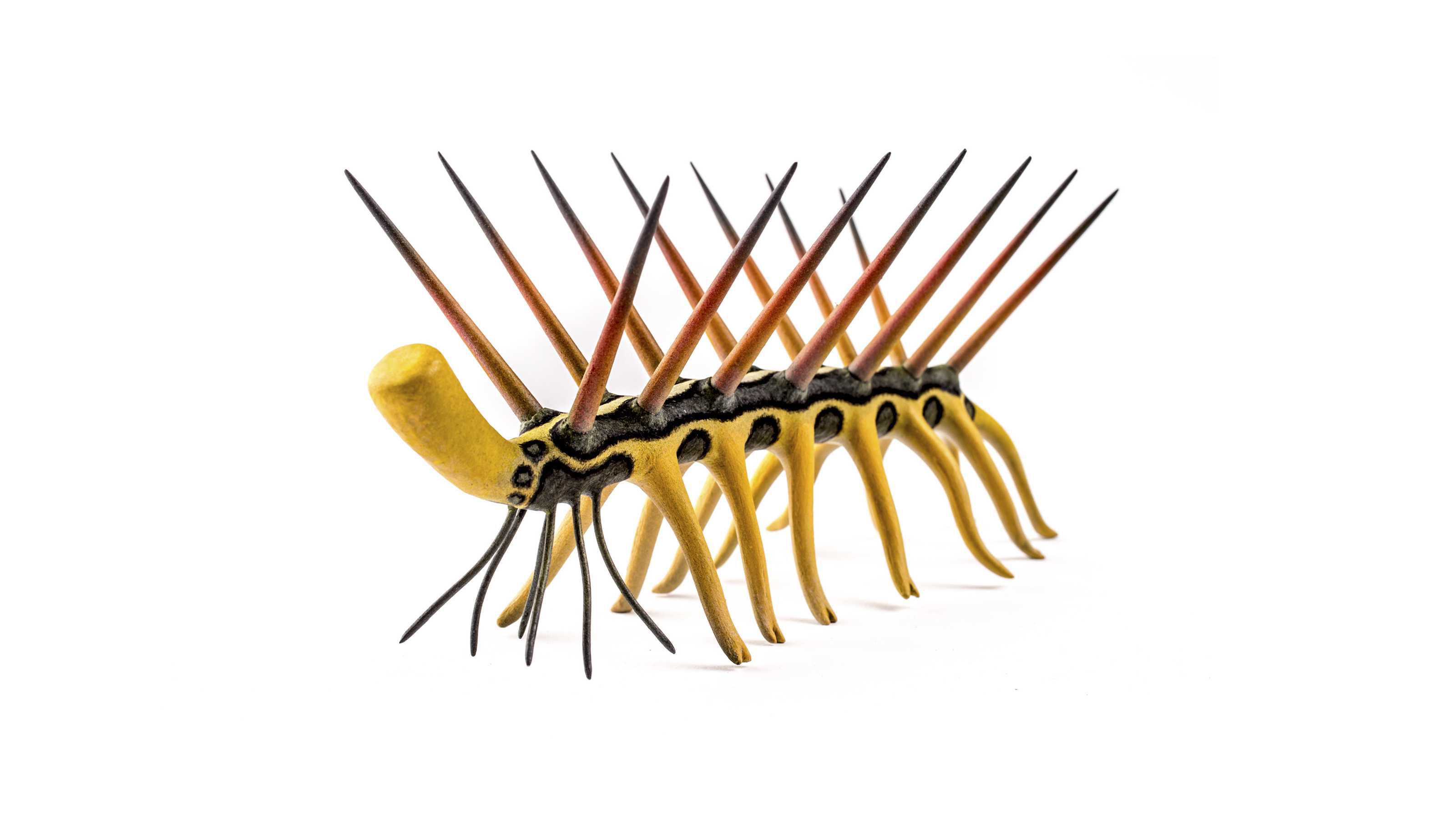 The name says it all: When Charles Doolittle Walcott first picked out Hallucigenia from the Burgess Shale, over a century ago, he was so flummoxed by its appearance that he almost thought he was hallucinating. This invertebrate is characterized by seven or eight pairs of spindly legs, an equal number of paired spikes protruding from its back, and a head virtually indistinguishable from its tail. (The first reconstructions of Hallucigenia had this animal walking on its spines, its legs mistaken for paired antennae.) For decades, naturalists pondered whether Hallucigenia represented a completely new (and completely extinct) animal phylum of the Cambrian period; today, it’s believed to have been remotely ancestral to onychophorans, or velvet worms. 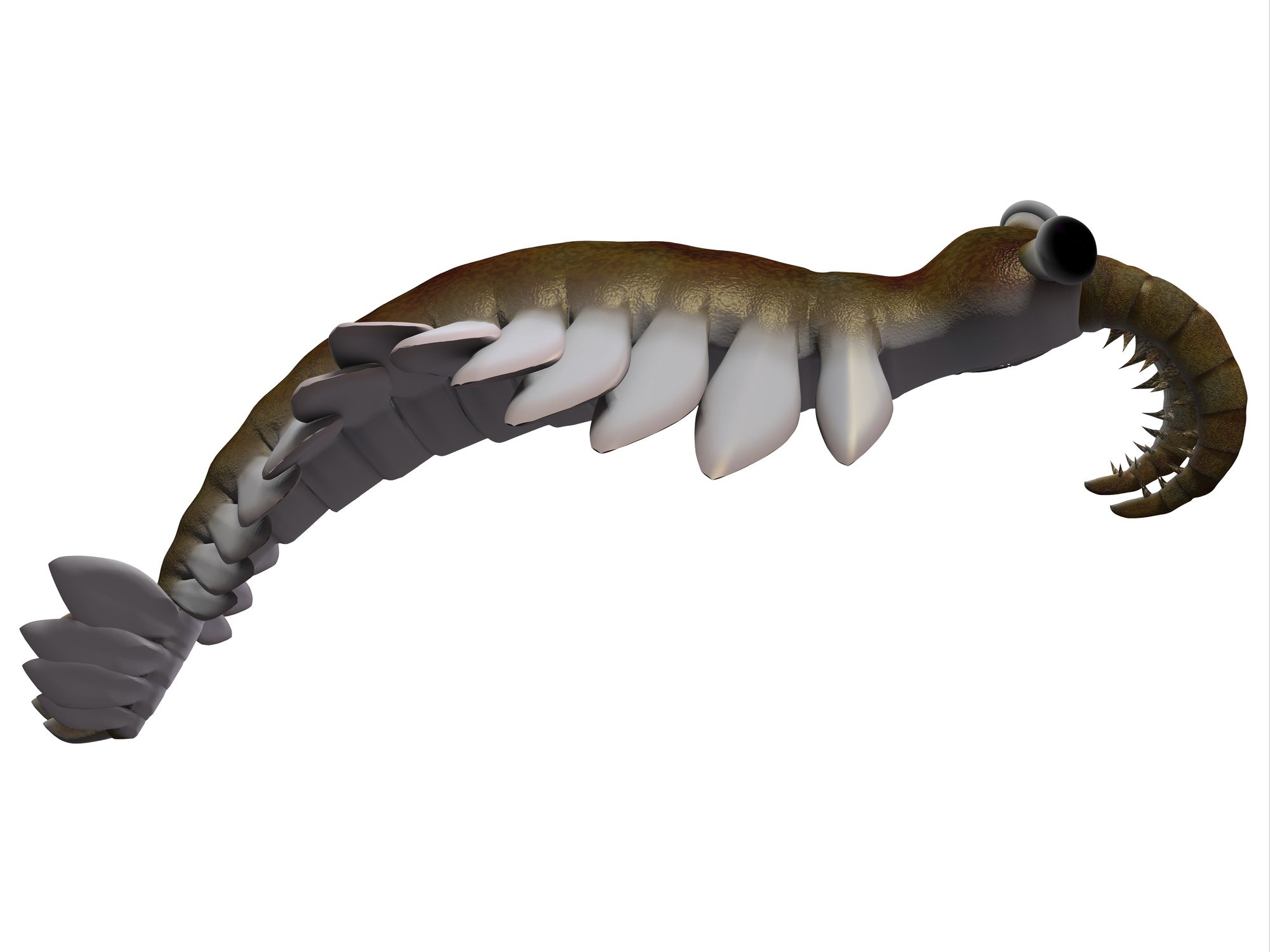 During the Cambrian period, the vast majority of marine animals were tiny, no more than a few inches long—but not the “abnormal shrimp,” Anomalocaris, which measured over three feet from head to tail. It’s difficult to overstate the weirdness of this giant invertebrate: Anomalocaris was equipped with stalked, compound eyes; a wide mouth that looked like the ring of a pineapple, flanked on either side by two spiked, undulating “arms”; and a wide, fan-shaped tail that it used to propel itself through the water. No less an authority than Stephen Jay Gould mistook Anomalocaris for a previously unknown animal phylum in his seminal book about the Burgess Shale, “Wonderful Life.” Today, the weight of the evidence is that it was an ancient ancestor of arthropods. 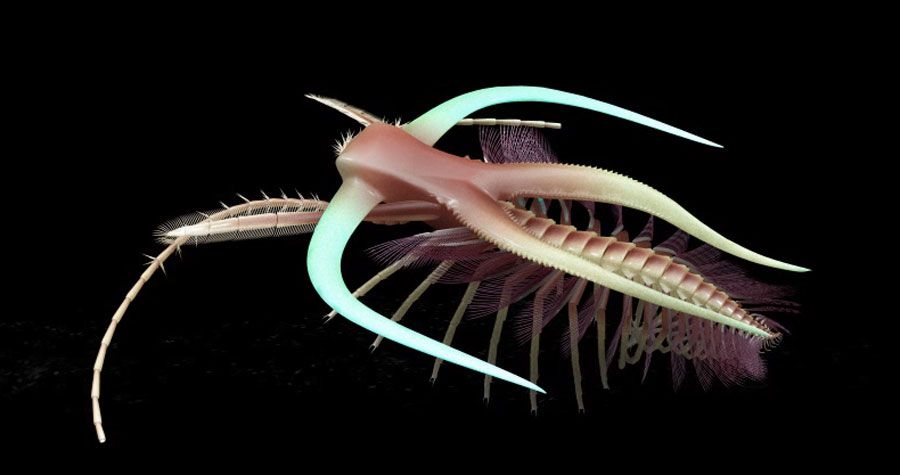 If there were only one or two extant fossils of Marrella, you might forgive paleontologists for thinking this Cambrian invertebrate was some kind of bizarre mutation—but Marrella is, in fact, the most common fossil in the Burgess Shale, represented by over 25,000 specimens. Looking somewhat like the Vorlon spaceships from “Babylon 5” (clips on YouTube are a good reference), Marrella was characterized by its paired antennae, rear-facing head spikes, and 25 or so body segments, each with its own pair of legs. Less than an inch long, Marrella looked a bit like an ornate trilobite (a widespread family of Cambrian invertebrates to which it was only distantly related), and is thought to have fed by scavenging for organic debris on the ocean floor. 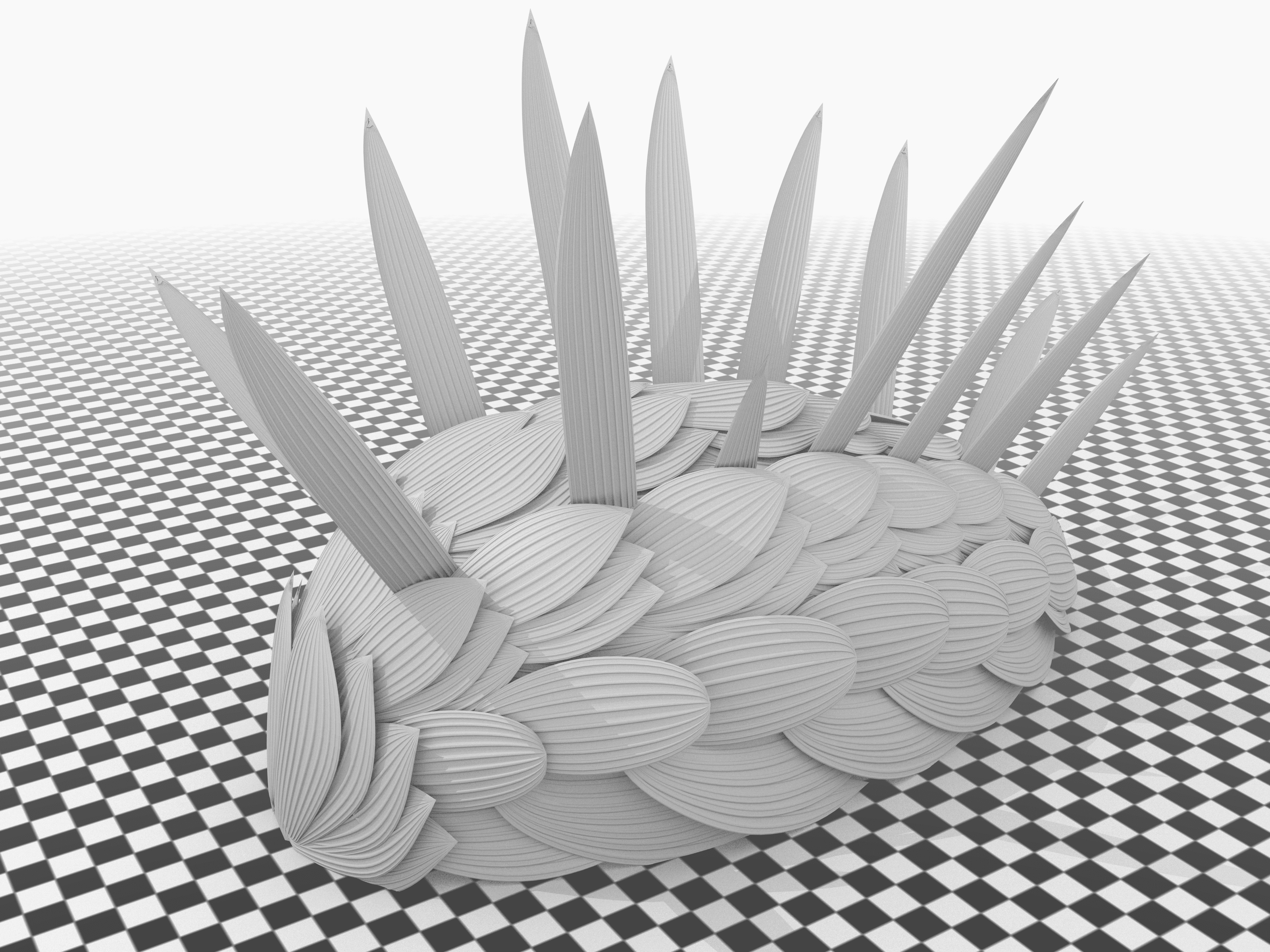 Looking somewhat like a two-inch-long Stegosaurus (albeit lacking a head, a tail, or any legs), Wiwaxia was a lightly armored Cambrian invertebrate which seems to have been distantly ancestral to mollusks. There are enough fossil specimens of this animal to speculate about its life cycle. The juvenile Wiwaxia seems to have lacked the characteristic defensive spikes jutting up from their backs, while mature individuals were more thickly armored and carried the full complement of these deadly protrusions. The bottom portion of Wiwaxia is less well-attested in the fossil record, but it was clearly soft, flat, and lacking in armor, and harbored a muscular “foot” that was used for locomotion. 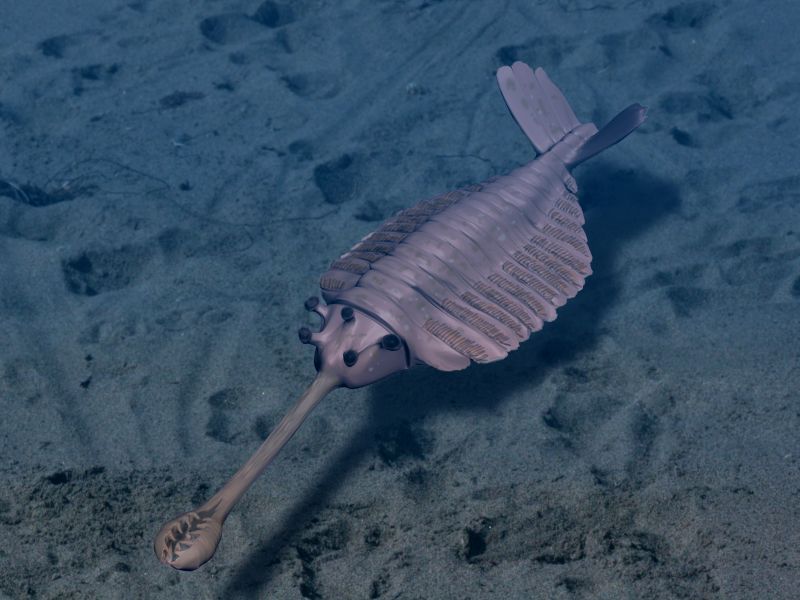 When it was first identified in the Burgess Shale, the bizarre-looking Opabinia was adduced as evidence for the sudden evolution of multicellular life during the Cambrian period (“sudden” in this context meaning over the course of a few million years, rather than 20 or 30 million years). The five stalked eyes, backward-facing mouth, and prominent proboscis of Opabinia do have the appearance of having been assembled in haste, but later investigation of the closely related Anomalocaris demonstrated that Cambrian invertebrates evolved at roughly the same pace as all other life on Earth. Although it has been difficult to classify Opabinia, it is understood to be somehow ancestral to modern arthropods. 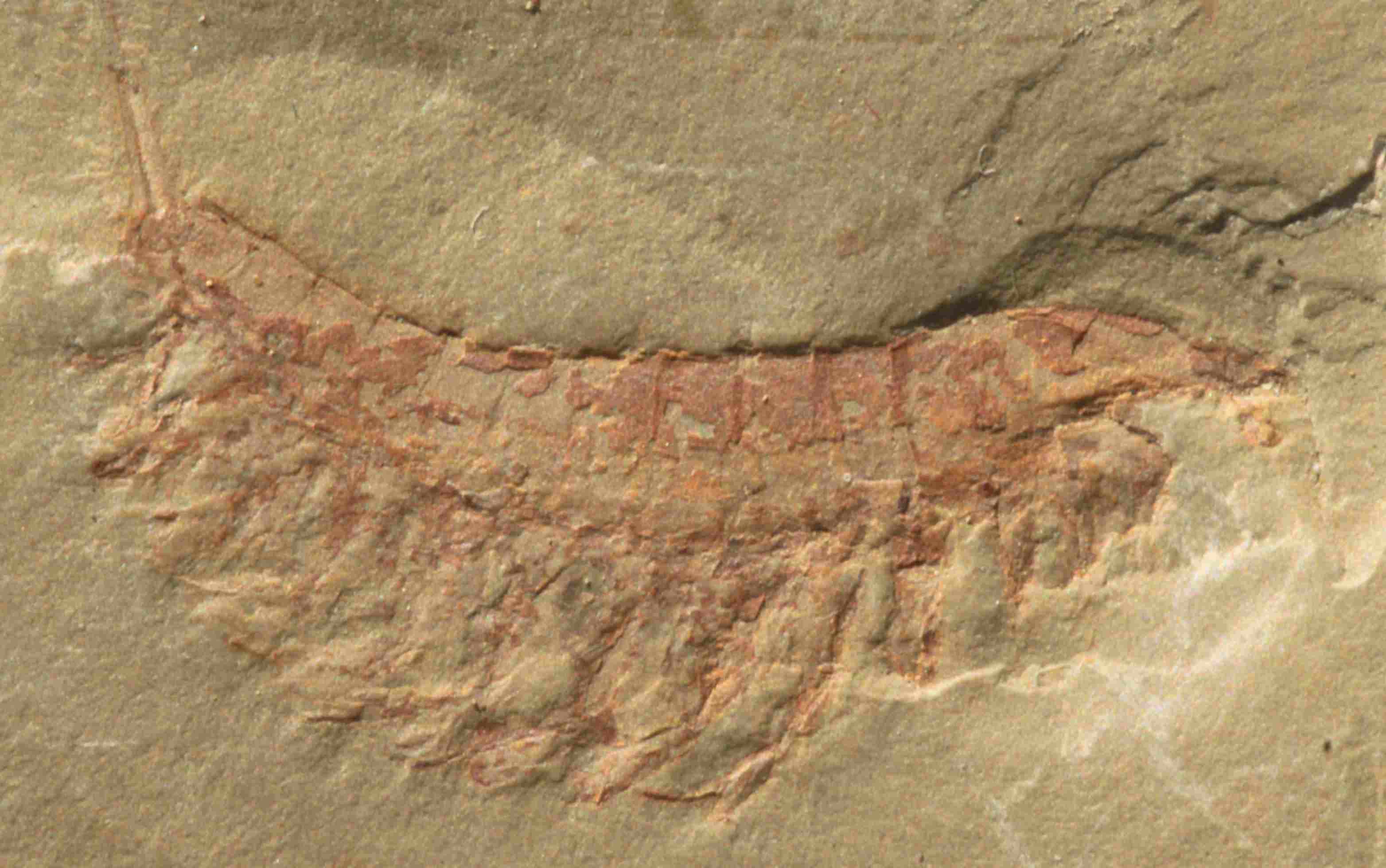 Leanchoilia has been variously described as an “arachnomorph” (a proposed clade of arthropods that includes both living spiders and extinct trilobites) and as a “megacheiran” (an extinct class of arthropods characterized by their enlarged appendages). This two-inch-long invertebrate isn’t quite as bizarre-looking as some of the other animals on this list, but its “a little bit of this, a little bit of that” anatomy is an object lesson in how difficult it can be to classify 500-million-year-old fauna. What we can say with reasonable certainty is that the four stalked eyes of Leanchoilia weren’t particularly useful. This invertebrate, it seems, preferred to use its sensitive tentacles to feel its way along the ocean floor. 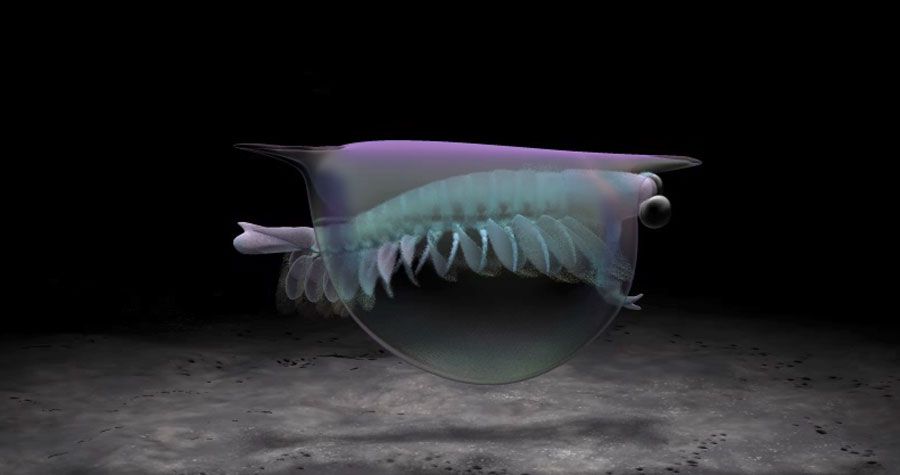 In a Cambrian world where four, five, or even seven eyes was the evolutionary norm, the oddest thing about Isoxys, paradoxically, was its two bulbous eyes, which made it look like a mutated shrimp. From the point of view of naturalists, the most striking feature of Isoxys was its thin, flexible carapace, divided into two “valves” and sporting short spines in the front and back. Most likely, this shell evolved as a primitive means of defense against predators, and it may also (or instead) have served a hydrodynamic function as Isoxys swam in the deep sea. It’s possible to distinguish among the various species of Isoxys by the size and shape of their eyes, which correspond to the intensity of light penetrating to various ocean depths. 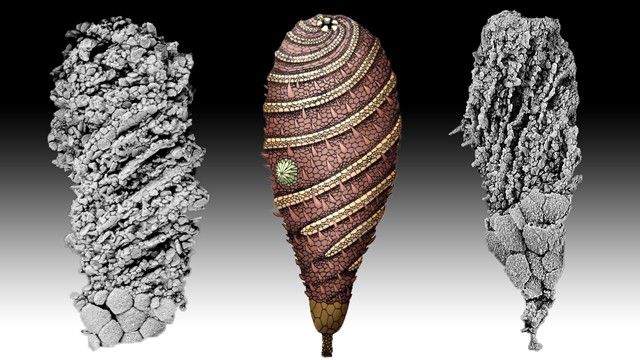 This Cambrian invertebrate was not ancestral to arthropods, but to echinoderms (the family of marine animals that includes starfish and sea urchins). Helicocystis wasn’t visually striking—basically a two-inch-tall, roundish stalk anchored to the ocean floor—but a detailed analysis of its fossilized scales betrays the presence of five specialized grooves spiraling out from this creature’s mouth. It was this incipient five-fold symmetry that resulted, tens of millions of years later, in the five-armed echinoderms we know today. It provided an alternative template to the bilateral, or two-fold, symmetry displayed by the vast majority of vertebrate and invertebrate animals. 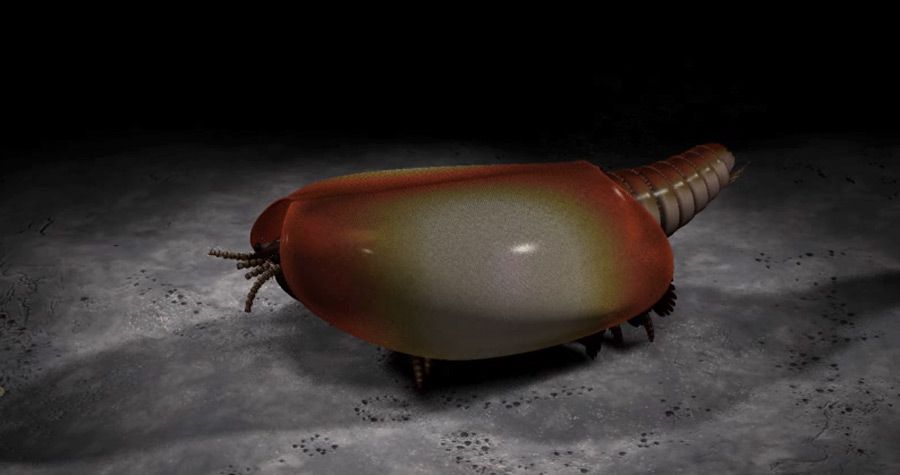 There are over 5,000 identified fossil specimens of Canadaspis, which has enabled paleontologists to reconstruct this invertebrate in great detail. Oddly enough, the “head” of Canadaspis looks like a bifurcated tail sprouting four stalked eyes (two long, two short), while its “tail” looks as if it is placed where its head should have gone. It is guessed that Canadaspis walked along the ocean floor on its twelve or so pairs of legs (corresponding to an equal number of body segments), the claws on the end of its front appendages stirring up sediments to unearth bacteria and other detritus for food. As well-attested as it is, though, Canadaspis has been extremely difficult to classify; it was once thought to be directly ancestral to crustaceans, but may have branched off from the tree of life even earlier than that. 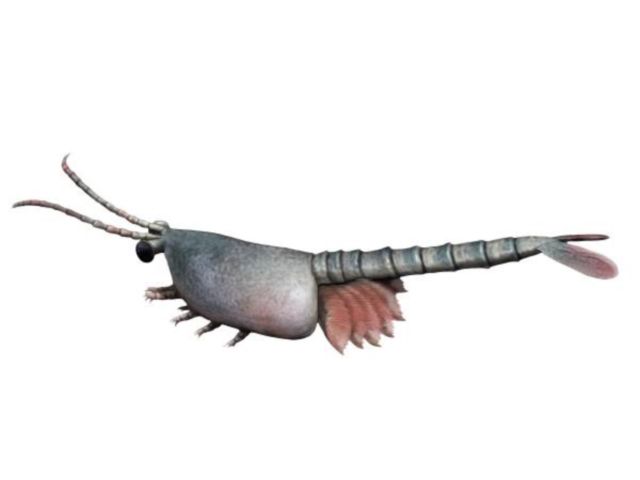 The strange appearance of Cambrian vertebrates is most similar in today’s world to the odd appearance of modern shrimp. In fact, Waptia, the third most common fossil invertebrate of the Burgess Shale (after Marrella and Canadaspis), was recognizably a direct ancestor of modern shrimp, with its beady eyes, segmented body, semi-hard carapace and multliple legs. It’s possible that this invertebrate may even have been colored pink. One distinctive feature of Waptia is that its four front pairs of limbs were distinct from its six hind pairs of limbs; the former were used for walking along the sea floor, and the latter for propulsion through the water in search of food. 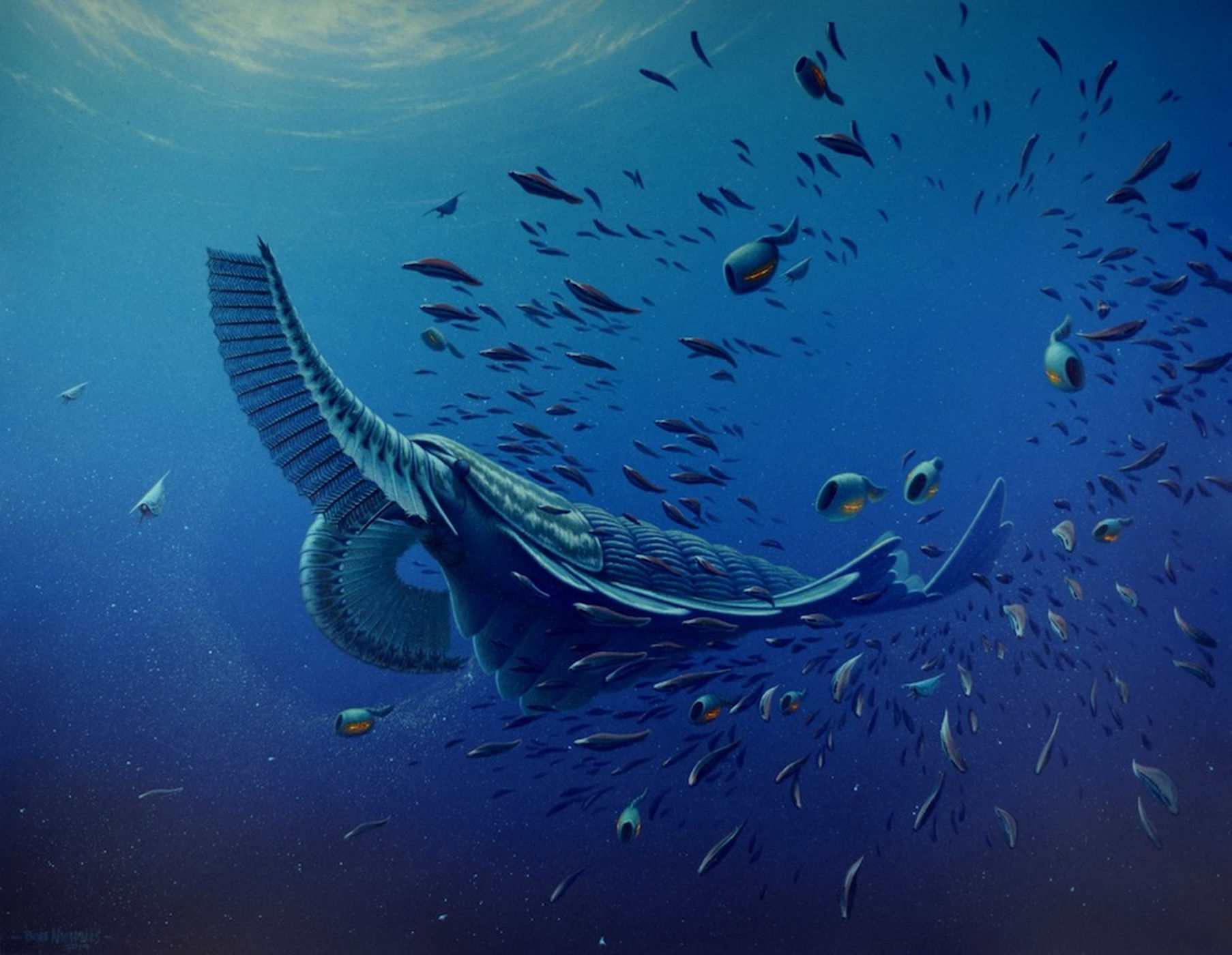 One of the most exciting things about Cambrian invertebrates is that new genera are constantly being unearthed, often in extremely remote places. Announced to the world in 2014, after its discovery in Greenland, Tamiscolaris was a close relative of Anomalocaris (see second slide, above) that measured almost three feet from head to tail. The main difference is that whereas Anomalocaris clearly preyed on its fellow invertebrates, Tamiscolaris was one of the world’s first “filter feeders,” combing microorganisms out of the sea with the delicate bristles on its front appendages. Clearly, Tamiscolaris evolved from an “apex predator”-style anomalocarid in response to changing ecological conditions that made microscopic food sources more abundant. 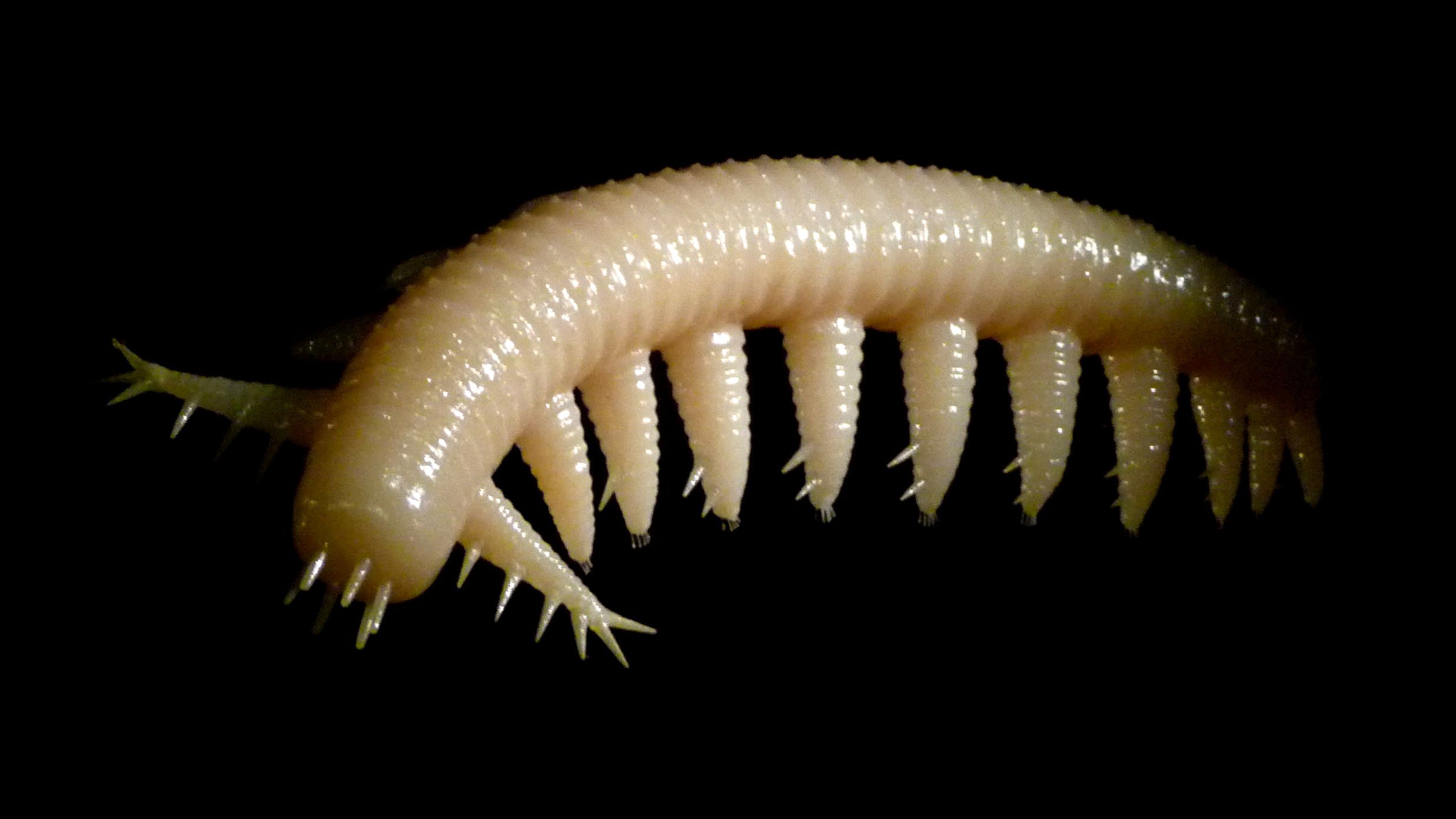 Possibly the strangest-looking Cambrian invertebrate presented here, Aysheaia is, paradoxically, also one of the best understood. It has many features in common with both onychophorans, also known as velvet worms, and the microscopic creatures known as tardigrades, or “water bears.” To judge by its distinctive anatomy, this one- or two-inch-long animal grazed on prehistoric sponges, which it clung to tightly with its numerous claws. The shape of its mouth signals predatory feeding rather than detritus feeding—as do the paired structures around its mouth, which were likely used to grasp prey, along with the six finger-like structures growing from this invertebrate’s head.

strangest animals That Are Hard To Believe Are REAL!

Check out the strangest animals that you won’t believe are actually real! This top 10 list of bizarre and mysterious creatures features some of the weirdest animal species ever discovered on earth!
Subscribe For New Videos! http://goo.gl/UIzLeB
Watch our \