If you want a breathtaking photo opportunity, Rex Lookout is where you need to go. 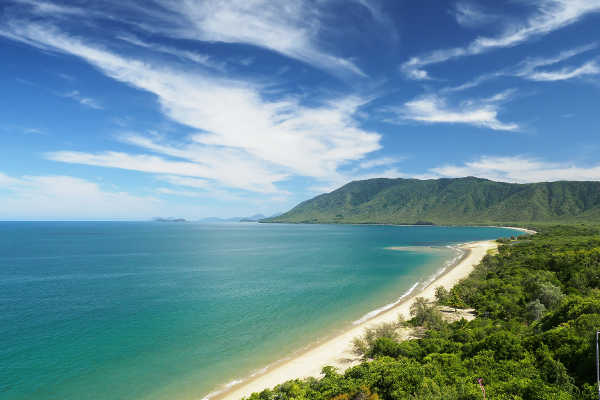 Located in between Cairns and Port Douglas, Rex Lookout provides a pristine viewpoint of Trinity Bay below, and pairs as a perfect backdrop to any photo. It doesn’t matter if you’re a fan of sun and sand, this view is definitely worth the stop. The lookout point has become a popular spot for hang gliders to jump from, as well as a busy meeting point for weekend travellers. Don’t forget your camera here, as with the coastal line, incredibly blue water, and the mountains in the back, this may be the most perfect photo you will ever take.

If for anything else, you may catch a hang glider or two launch from Rex Lookout and float down to the beach below. This lookout is located just outside of the town of Wangetti on Captain Cook Highway. Trinity Bay below is part of the World Heritage Site, the Great Barrier Reef. Rex Lookout not only gives you the chance to view the Great Barrier Reef from a different perspective, but also provides a great resting point for those who are on longer road trips, and are in need of a place to stretch the legs and walk around.

The History of Rex Lookout

The name Rex Lookout came from a man named Raymond Rex, who was the Douglas Shire Councillor. Raymond Rex was a valued member of his shire, where he stayed as chairman of the Douglas Shire Council for 45 years! His community respected him tremendously and his efforts to have the Captain Cook Highway completed from Port Douglas to Cairns during the time of The Depression. Although he was respected by many, others fought him in his determination to get the road finished, claiming that people would spend their money elsewhere than Mossman and Port Douglas. And by elsewhere they meant Cairns.

He also helped establish water and power supply from Rex Creek while he was still alive. Needless to say, Mr. Raymond Rex had a significant influence with the construction of the Captain Cook Highway Rex Lookout and other transportation developments. There is a plaque dedicated to him at the lookout for visitors to pay their respects to a man who fought hard and long to finish that road. The monument was dedicated on August 21st, 1982.

Things to do at Rex Lookout

Though most people flock to Rex Lookout for its stunning views, there is plenty to do in the area as well.

Rex Lookout not only is a popular destination between Port Douglas and Cairns, but it also is a reminder of the hard work of one man’s life. The Rex Lookout is a perfect way to take in the area that he once fought to develop. From the lookout, you can soak up the fascinating history while being surrounded by the stunning expanse of the Daintree Rainforest and the Great Barrier Reef – two of Australia’s most incredible natural hotspots.

It’s well worth a visit if you’re travelling between Cairns and Port Douglas or vice versa, acting as a great stop-off point that’s imbued with a sense of local history and amazing views.

Some of the common naturally occurring australian palm trees

Must see attractions & things to do