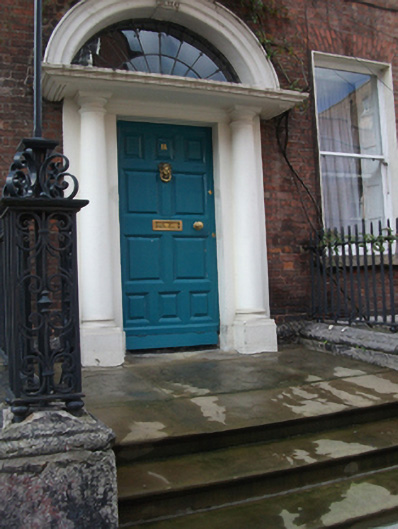 I visited 11 North Great George’s Street in 2012 during Open House, run by the Irish Architectural Foundation. I went with my husband Stephen and my Dad, Desmond. There is a video of the day on the website and I am excited to see myself in it! [1]

We loved this house! It’s wonderfully decorated and we had a tour with owner John Aboud who is himself an architect, I believe. The decor is very quirky and full of character. I loved the plaster decoration on the walls, “John Soane’s Museum” style. Like Peter Pearson, the occupant has rescued parts of old houses which are being discarded. How I’d love to come across such a skip!

According to the Buildings of Ireland website, this house was one of the first to be built on North Great George’s Street, a street of stepped terraces built after 1768 as a result of commercial leases granted on the avenue leading to the mount eccles Estate and in response to the expansion of the Gardiner Estate [2]. The houses were built as townhouses for the gentry.

The street has its own North Great George’s Street Preservation Society, which has an excellent website with a history of the street written by Conor Lucey. [3] The Preservation Society began in 1979, according to its website, by a group of resident house-owners who had become concerned about the fate of the street, which had survived almost alone amid the surrounding dereliction of North Central Dublin. The Association was formed more recently to represent the views and interests of the many long-term residents in the street.

Nicholas Archdall was MP for County Fermanagh. His son, Edward Archdall, became a property developer. He built numbers 19 and 20 North Great George’s Street in the late 1780s. Nicholas Archdall’s widow Sarah (nee Spurling) petitioned the Irish Parliament in 1766 for permission to grant long leases on premises on her property. She may have been inspired by the new Gardiner estate and Gardiner’s Row. Permission was granted, and the advertisement read:

To be Let in Lots for Building, the Lands of Mount Eccles, in Great Britain-street, opposite Marlborough-street, joining Palace-row and Cavendish-street, containing seven Acres, which for Situation, Air and Prospect, cannot be exceeded by any in or about Dublin, subject to no Manner of Tax, Hearth Money excepted. For further Particulars, enquire of Mrs. Archdale, at Mount Eccles, where a Plan of the whole may be seen. 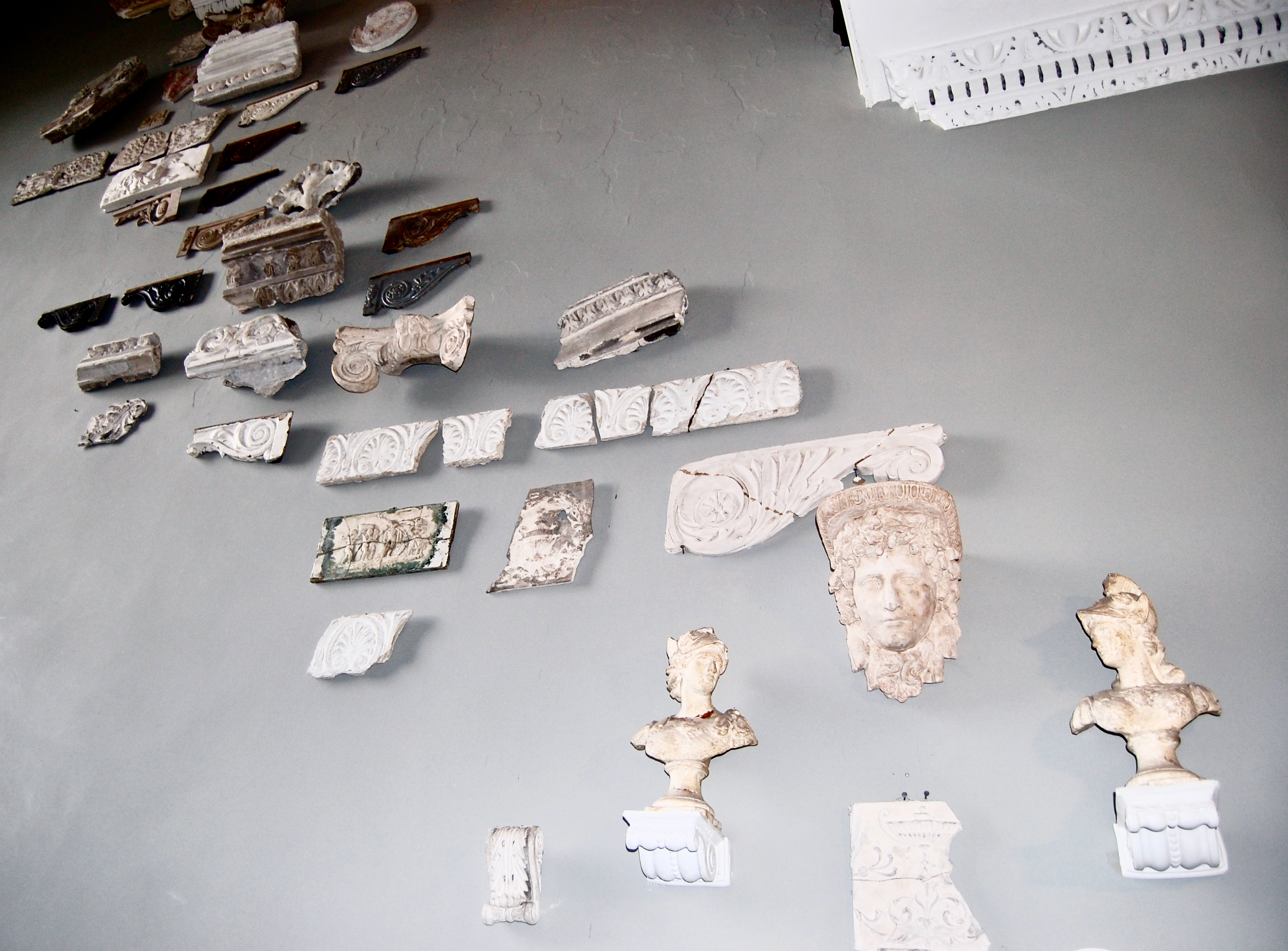 Lucey tells us that the leases for North Great George’s Street contain no covenants or specifications regarding the form of the house, except for the provision of an eight foot wide ‘area’ intended to be ‘in the front of the houses which is to be built on the said ground over and above the flagged passage which is to be 6 ft and 6 in wide’. Other developments, such as Merrion Square and Fitzwilliam square, had much more detailed specifications for the houses to be built.

Lucey describes the typical layout of the houses on the street:

“By far the most common plan type is the ‘two room’ plan, composed of an axially- aligned entrance hall and stair hall, and flanked by front and rear parlours, the latter typically serving as the formal dining room. The principal staircase, customarily of timber open-string construction, is situated at the back of the house and rises from the ground floor – by way of the piano nobile or ‘drawing room storey’ – to the ‘attic’ or bedroom storey, with admittance to the ‘garret’ alone acquired by a smaller, subordinate stair. A distinctive decorative feature of the garret storey stair is the ‘Chinese Chippendale’ balustrade, popular from mid-century and exemplified by surviving examples at Nos.4, 11, 36 and 50.”

Chinese Chippendale balustrade on the way to the garret, with the owner’s display of masks.

The Act of Union of 1800, however, meant that there was no longer a Parliament in Dublin and many gentry left Ireland. The house’s website states:

“Despite the drain from the city of power and money after the Act of Union in 1800, North Great George’s Street managed to hold onto some grandees till the very end of the 19th Century. In the case of no. 11, these included in 1821 a George Whitford, High Sheriff of Dublin, who was knighted in that year by George IV at the Mansion House. No doubt to celebrate his new status, he had the front doorcase re-modelled to accommodate a large new fanlight, and also had the Salon joinery replaced in the fashionable neo-classical style.”

The No.11 website tells us more about former inhabitants.

Dr. Charles Orpen lived in the house in the 1830s. He played a significant part in the development of sign language, and in the education of deaf children, founding Ireland’s first school for deaf children, in 1816, in Brunswick Street (now Pearse Street). It became The Claremont Institution for the Deaf and Dumb when it moved to a large demesne called Claremont in Glasnevin. Dr. Orpen worked at the Workhouse at the House of Industry in Dublin, where he noticed that there were 21 deaf children. He took one of the children, Thomas Collins, home to educate him, and based on his learnings about the conditions of being deaf, he gave several popular lectures in the Rotunda, which led to a public interest in the condition and of education of deaf and dumb children. [4]

Another former inhabitant of number 11 in the 1850s was a barrister named Patrick Blake. He had Nationalist leanings, and the no.11 website tells us that it is believed that Michael Davitt, one of the leaders of the Irish Republican Brotherhood and the Land League, was hidden in the house for some time before his arrest and imprisonment in 1870. By this time, and for the rest of the century, the domestic quarters of the house had retreated to the top two floors, and the rest of the house was given over to office space for barristers and land agents.

As the wealthy left the city centre for houses in the suburbs, in 1910 a Mr. Kelly bought the house and turned it into a tenement. The No.11 website tells us that unlike many houses, the landlord lived on the premises and so the house survived many of the ravages that other houses suffered at this time. Between the 1930s and 1970s every room in the house was used as a family flat.

By the early 1980s the historic centre of Dublin had been all but abandoned. The house was largely derelict with a roof that was on the point of collapse. The website tells us that a great deal of the house was saturated and pigeons inhabited the upper floors. Despite this, the last tenant, Mrs. Margaret Howard, who had moved into the house in 1921, struggled to maintain an old fashioned gentility in her tenement rooms.

The website also mentions the original plaster walls and ceiling, as well as original timber joinery and flooring. The ceilings seemed overly colourful, but the owner assured us that this is how such a ceiling would have looked originally.

“Upper floors having large amounts of surviving late Rococo plasterwork with projecting birds, acanthus leaves and flower-baskets to rear rooms. First floor saloon having ceiling with flower vases, acanthus pendants and cartouches. Neo-classical over-doors and friezes with urns and festoons. Lugged architraves throughout and moulded joinery [“lugged” is a moulded frame with horizontal projections at the top, according to wikipedia]. Imposing fluted Doric architraves to round-headed windows at each half-landing. Chinese Chippendale stair to garret floor.” [5] 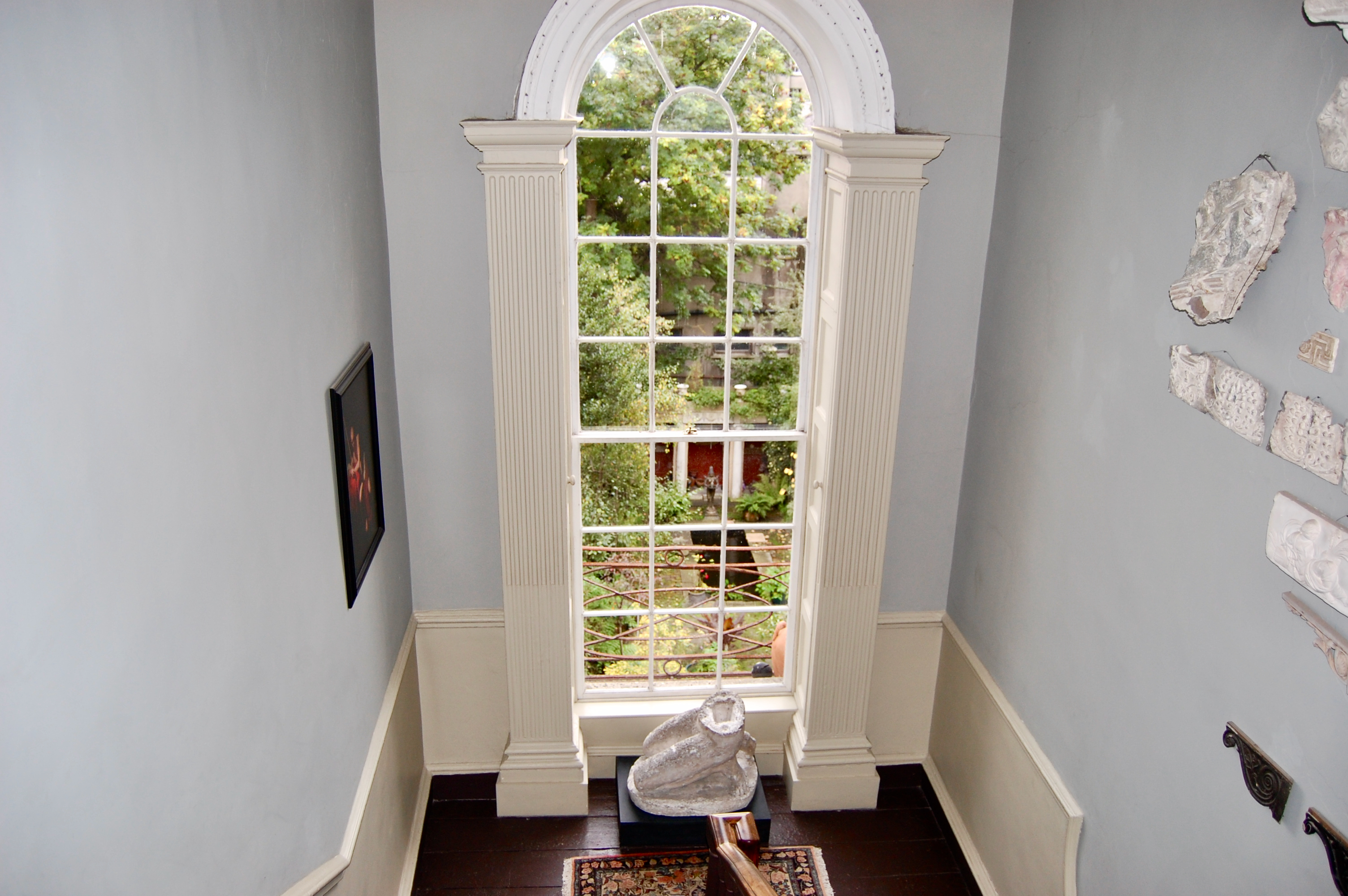 The home owner is a collector, not only of architectural pieces and masks, but of dolls:

Some of the architectural pieces are from, I believe, a church that was demolished, St. Peter’s Church on Aungier Street. These banisters might have been altar rails: 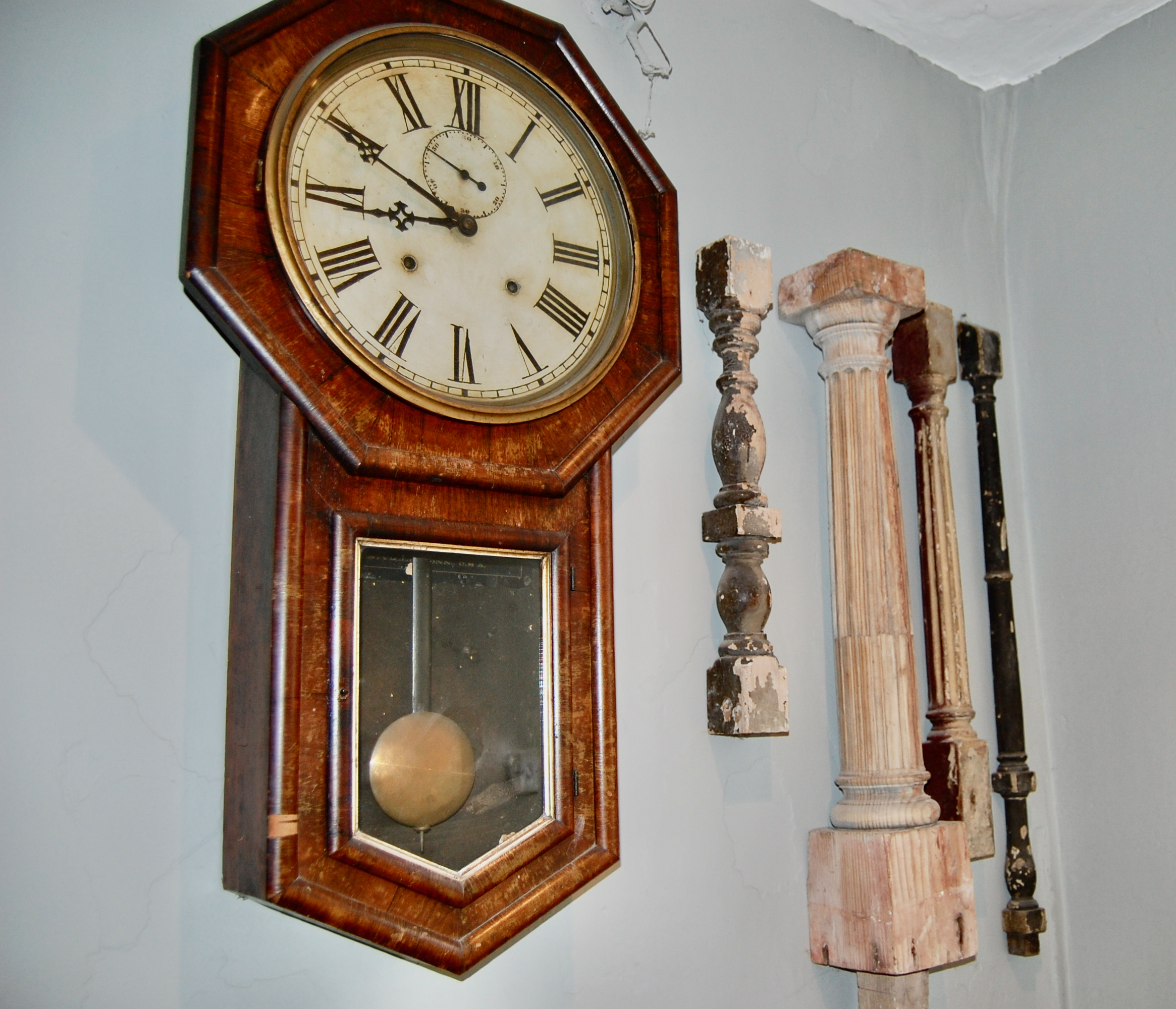 The back garden is beautifully tranquil with an Oriental vibe, with a pond and a temple at the back with more architectural pieces and sculptures. 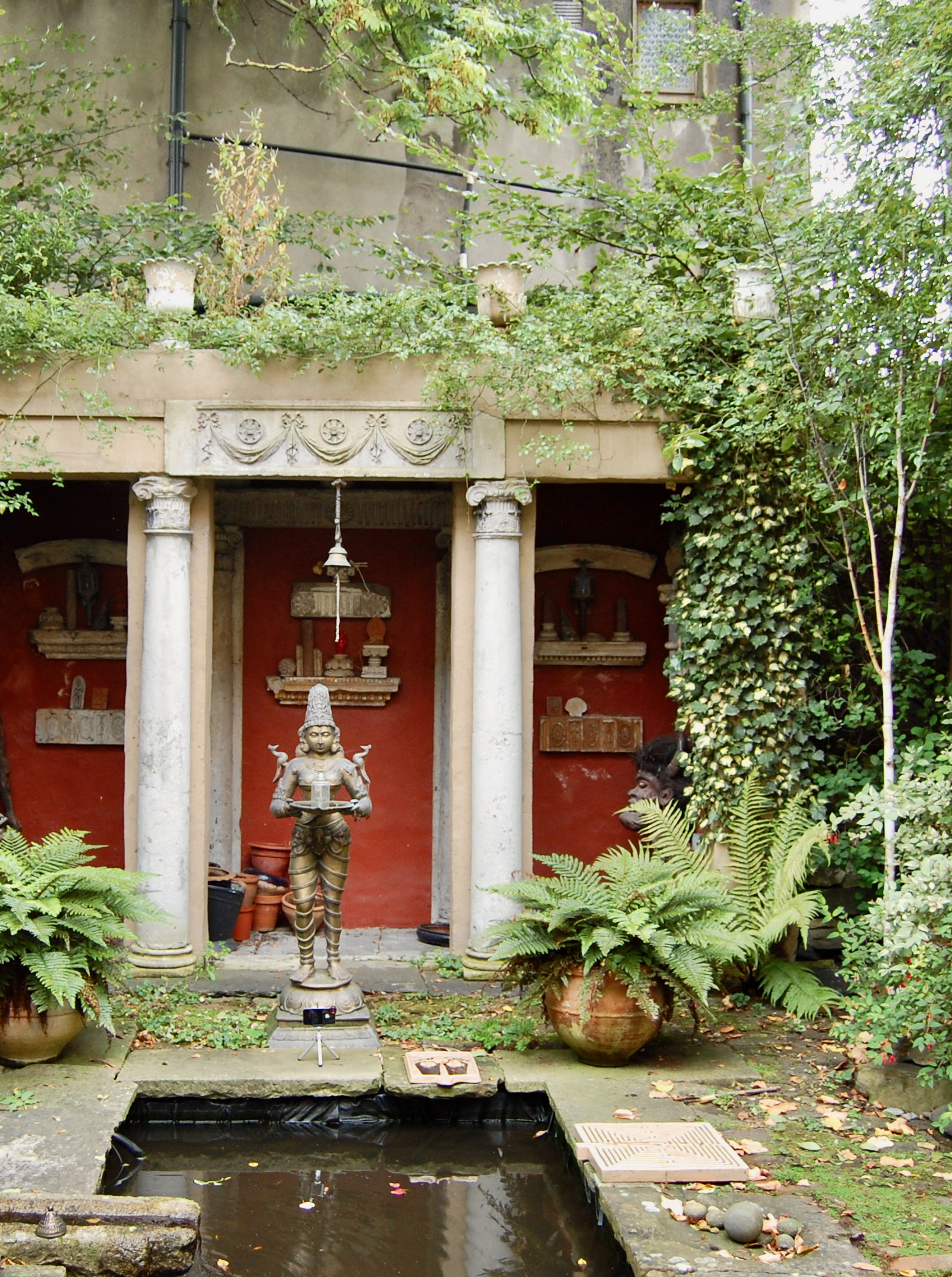 “Largely dilapidated by the early 1980s, it was carefully conserved by the owner and is now a residence and venue for weddings and other events. The surviving early plasterwork is a fine example of the traditional ‘Dublin school’ Rococo style and its juxtaposition with the Neo-classical embodies the stylistic developments of the late eighteenth century. The oversailing lintel of c.1820 is one of few on the street and the restored light posts add a further element of interest in the public realm of the street. The retention of timber sash windows and of the granite and iron work to the entrance and basement enhances the architectural heritage quality of this house and of the street in general.” 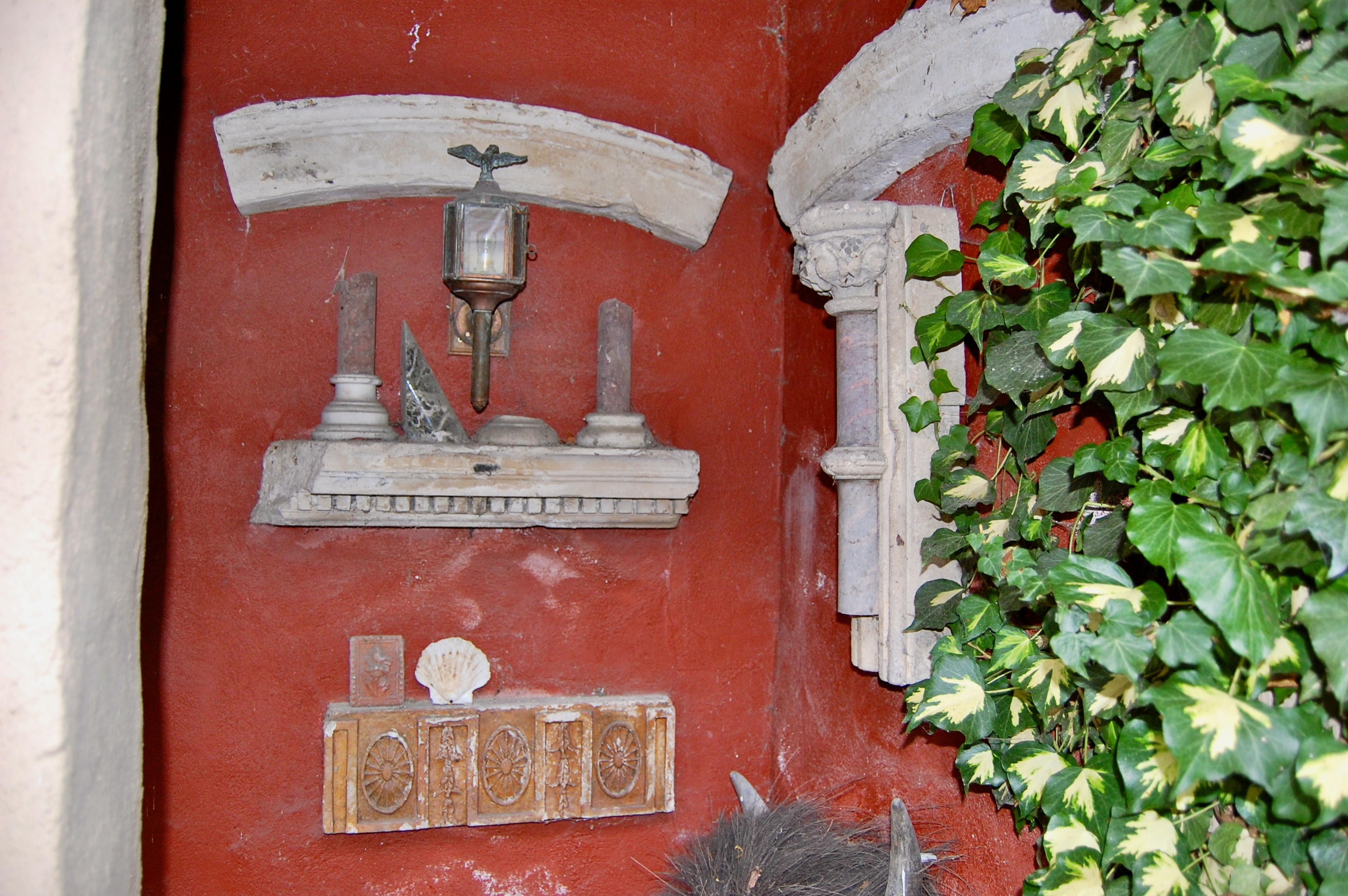 The website for number 11 has a link to airbnb accommodation available in the house.

At the top of North Great George’s Street, on Denmark Street, is Belvedere House, now part of Belvedere College, a boys’ secondary school. I visited this on another Open Day. Its splendid stucco work is of the Neoclassical or “Adam” style popular in Dublin in mid 1770s to 1800, designed by Michael Stapleton. Conor Lucey writes:

“The neoclassical style is also well represented by Belvedere House. Built for George Augustus Rochfort, 2nd Earl of Belvedere, and completed by 1786, it is one of the finest city mansions built during the latter part of the century. The interiors of this house represent a text-book model of how Irish stuccodors invented freely within the Adamesque idiom, deriving their decorative vocabulary from architectural treatises, builder’s manuals and pattern books.”

Belvedere House, 2015. The architect was Robert West. 86 St. Stephen’s Green has also been attributed to Robert West, which now houses MoLI, the new Museum of Literature of Ireland. The stucco work in no. 11 North Great George’s Street is of the Robert West school.

[5] According to Craig, Maurice and Knight of Glin, Ireland Observed, A Handbook to the Buildings and Antiquities. Mercier Press, Dublin and Cork, 1970, Rococo is the asymmetrical freely-modelled style of decoration originating in France and popular in Ireland from about 1750 to 1775. See also Architectural Definitions: