Glow worms are found throughout Australia and New Zealand and are some of the most fascinating creatures in the world. 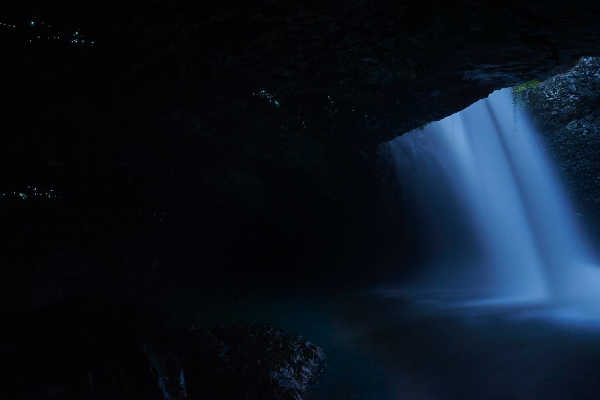 Like something out of a fairytale, they light up the darkness with their luminescent glow and provide a magical scene if you get to see them in the wild.

Throughout Australia’s Gold Coast, there are plenty of chances for you to spot glow worms, whether that’s outdoors under the canopies of lush rainforests or tucked away inside caves that date back millions of years.

In the Gold Coast itself, it’s the Springbrook National Park that boasts Australia’s largest population of glow worms. Here, you can take an evening bushwalk through the lush forest where glow worms flit between the leaves and cast magical shadows on the forest floor. As you stroll through the tall trees and pass ancient vegetation, you’ll come to a historic cave that houses the vast majority of the region’s glow worms.

The cave itself is made up of two large chambers that are joined together by interlinking tunnels that weave their way underground. In the first chamber, you can learn more about the glow worms, their history in the region, their behaviour, and their habitat with an audio-visual display that will prepare you for what’s to come. Further inside the chamber, you can marvel at the extensive collection of realistic-looking stalagmites and stalactites and water features, which provide an authentic backdrop to view the glow worms against.

The Life of a Glow Worm

Glow worms are the larvae of a fly called the fungus gnat, which breeds over two days before they perish. So, they aren’t actually worm’s at all! The transformation period of the glow worms before they become adult flies lasts from 9 months to a year, depending on how much food they have and the environmental conditions. During this time, the glow worms must eat as much as they can to sustain themselves through the adult gnat period, as they lack functioning mouths and only live for a few days. They capture the attention of prey (usually mosquitos) by emitting a blueish-green light. As the prey travels towards the light, it gets caught in the worm’s woven silk threads.

Since the glow worms need a wet habitat to thrive, there are limited places across Australia where they can exist. Springbrook National Park holds the largest colony of glow worms in Australia but the nearby Mt Tamborine national park has introduced the first-ever purpose-built cave for glow worms. As the Australian climate becomes drier, it is important that glow worms still have a habitat in which they can thrive. Mt Tambourine has created a cave with ideal, moist conditions in the hope that it will provide the glow worms with the perfect home and enough food to survive the breeding season. This cave aims to eventually allow the glow worms to become a self-sufficient colony.

How to visit a Glow Worm Cave

There are a couple of rules that you’ll need to follow when you’re visiting the glow worms. As they are quite sensitive to light, its best not to use flash photography and if you have a torch, be sure to only point it downwards and not up at the larvae. Noise should be kept to a minimum and the glow worms should not be touched. Glow worms are extremely important to our ecosystem as they control the insect population by eating mosquitoes and smaller flies.

The area the glow worms live in is a heritage site, which means the only way to get up close and personal with them is to take a guided tour. While on these tours, you’ll not only get to see the creatures and their fairytale habitat, but you’ll learn all about their life cycle, behaviour, and eating habits. The glow worms tour begins after dark, taking you on a mystical bushwalk through the ancient rainforests that characterise the region. Within the caves that you visit on your tour, you’ll get to watch the creatures flit from side to side, casting a surreal glow against the backdrop of old, echoing caves. What’s more, once you’ve concluded watching the glow worms, you’ll be able to enjoy a different kind of glow – the glow of the stars that light up Australia’s night sky. Gazing up at the night sky of the southern hemisphere after standing amongst the constellations created by the glow worms is a magical experience.

How do Glow Worms Glow?

The light from a glow worm is created by bioluminescence meaning that it comes from within the living organism. They are not the only creatures that can produce light, however – so can fireflies, some spiders, and deep-sea fish and microorganisms. The light is emitted by way of a pigment that reacts when combined with the enzyme ‘luciferase’, as well as with the oxygen. This chemical reaction creates the bluish-green light that you see in the caves.

If you find yourself exploring the Gold Coast Hinterland, then seeing the local glow worms is an absolute must-do. As well as learning more about these rare and fascinating creatures, you can see them in their natural habitat and watch as they light up the ancient confines of their cave with a mesmerising glow.

Natural Bridge is in the western part of Springbrook National Park.
It is very popular with walkers and bird lovers during the day.
Spectacular waterfalls, lush rainforest, ancient trees, impressive views, exceptional ecological importance and natural beauty makes Springbrook an outstanding place to visit.
Springbrook National Park is part of the Gondwana Rainforests of Australia World Heritage Area, one of Queensland’s five World Heritage properties and part of the World Heritage Family.
The drive to Natural Bridge is via the Nerang Murwillumbah Rd, through jawdroppingly gorgeous unspoilt mountain scenery and tiny valley hamlets to the cusp of the NSWQLD border.
The park’s Natural Bridge section features a picturesque rock formation, formed by the force of the waterfall over the basalt cave.
Follow the easy one kilometre circuit (walk in a clockwise direction) and descend through ancient Gondwana rainforest to the Natural Bridge rock arch.
Hoop pines emerging from surrounding forest are living relics of the Jurassic Age, 180 million years ago.
During the day spot paradise riflebirds, green catbirds, wompoo fruitdoves and also rare and threatened species like the cascade tree frog, tusked frog, sooty owl and koala. At night the cave comes alive with the tiny green lights of thousands of nocturnal glowworms, and the silent wings of microbats.
Glowworms are visible yearround, their display is significantly reduced during the winter months.
To protect the glowworms and maximise visitor safety, parts of Cave Creek are a restricted access area swimming is prohibited and penalties apply.

Everything you need to know about sea pigs

Can you have a wombat as a pet? dangerous or friendly? diet, habitat & interesting facts