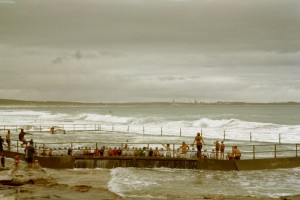 This pool attracts more photographers than the other pools on this rock platform.

Clans of the Dharawal people lived around North Cronulla and Cronulla Beach.

1885
The railway reached Sutherland and the Cronulla area gained popularity as a picnic place.

1888
The Oriental Hotel occupied the site near the present-day North Cronulla Hotel.

1939
Cronulla became the only Sydney beach with a railway station.

1990
The South cronulla rock pool still needed repairs some five years after experiencing storm damage.  Funds  to create a new pool at the site at an estimated cost of $300,000 came from the NSW Department of Sport, Recreation and Racing  ($130,000) and the Sutherland Shire.

1991
The poor state of  the South Cronulla rock pool meant large crowds vied for swimming space at the Shelly Beach pool. Work to replace the earlier pool began early in 1991 and the pool was available for use in the summer of 1991-1992.

1992
As noted on a plaque near the pool, Shire President, Cr. Ian Swords, opened the new Cronulla  Rock Pool on Australia Day 26 January.

2003
An assessment of the Shire’s ocean pools was identified as a necessary part of the ongoing management of its coastal assets.

2005 to 2006
Incidents at the beach fuelled the December 2005 riots at Cronulla. Extra Beachsafe police were deployed to Cronulla for the rest of the 2005/6 beach season.

The pool was well used by the public on an informal basis and had many regular users. Surf club nippers and winter swimmers train and compete in the pool.

A guide to legally owning and caring for a pet otter