Blue dragons, or more properly Glaucus atlanticus, are part of a group of creatures known as nudibranchs or sea slugs. They also are known as blue sea slugs, blue angels, and sea swallows. There are a few similar blue dragon species within the Glaucus genus. These creatures free float in currents of temperate and tropical ocean waters worldwide, specifically the Atlantic, Pacific, and Indian oceans. It is unknown how many blue dragons exist, as they are small and hard to quantify.

Blue dragons grow to about 1.2 inches long, yet they eat creatures many times their size. They do this with radular teeth that resemble a knife’s serrated edge along the creature’s chitinous jaw. Chitin is the same hard substance that forms the outside of ants and crabs. 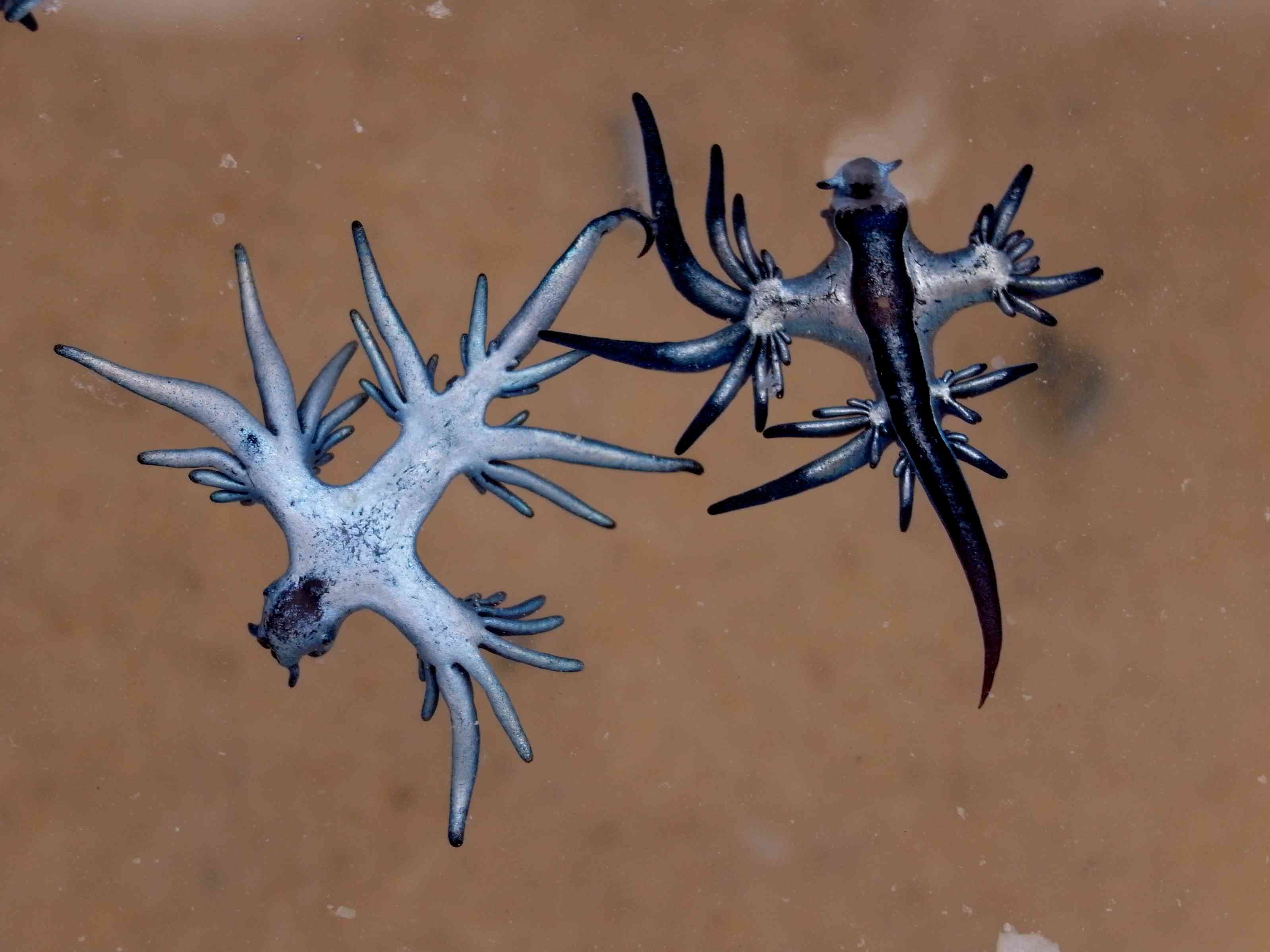 Predators have a hard time seeing the slugs thanks to those dashes of color.

This species of sea slug is not defenseless as it floats. If the camouflage fails to hide it from potential predators, a sting is its next line of defense.

The slug isn’t venomous all on its own, however. It stores the stinging nematocysts created by the creatures on which it feeds, including venomous siphonophores and Portuguese man o’ wars. These cells are stored and concentrated, so when it’s touched, the blue dragon can release these stinging cells to pack an even more powerful punch than the man o’ war hydrozoan. 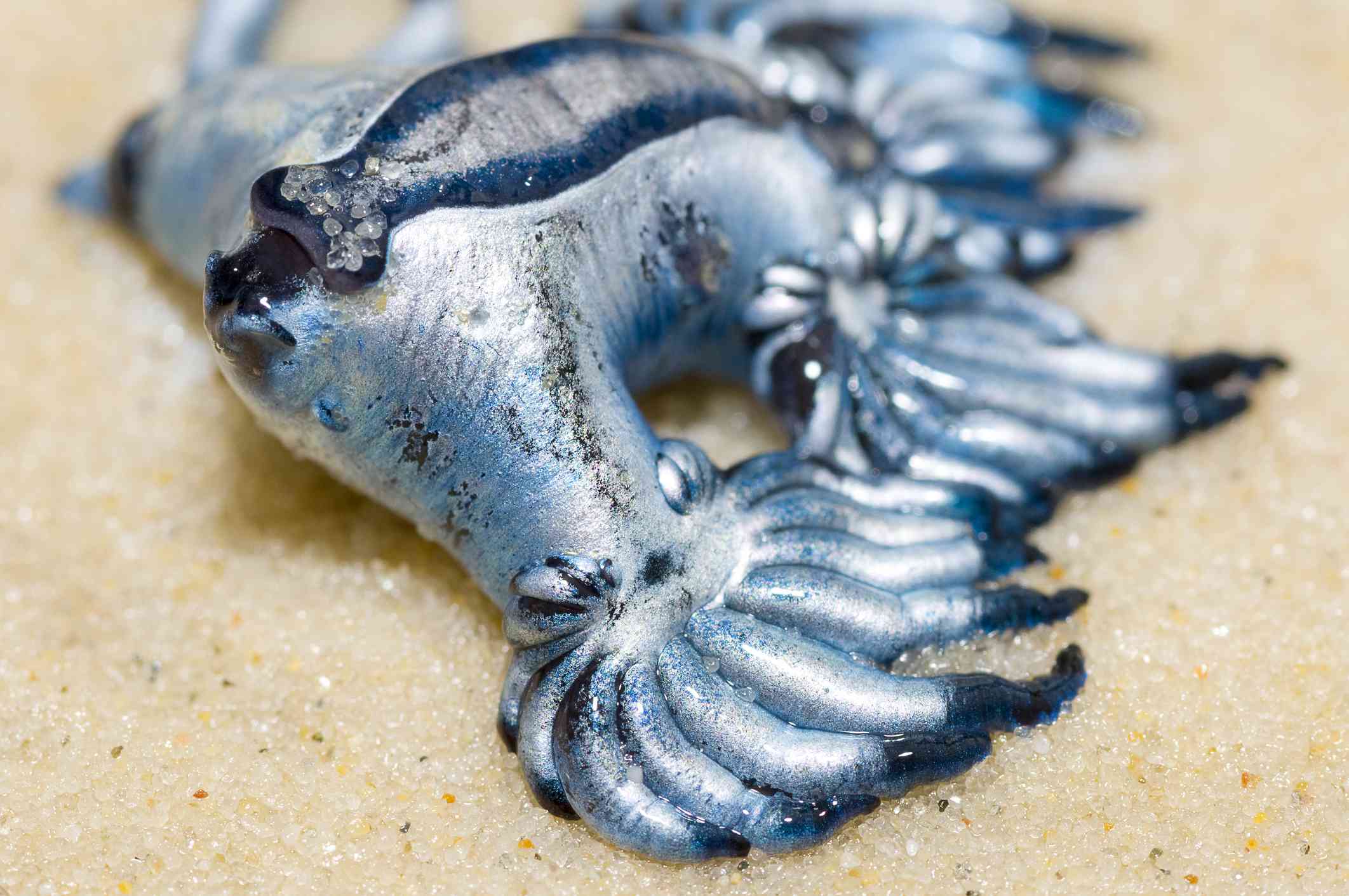 Groups of blue dragons float among the blue-tinted siphonophores they eat, creating formations known as “blue fleets.” This behavior makes sense for feeding and mating, but it does create conditions favorable for oceanic winds to blow them ashore by increasing their exposed surface area.

Blue dragons curl into balls to protect themselves when they’re caught in waves and are being pushed toward the beach. And if they do become stranded on the sand, their venom remains active — even after they die. This means that humans who pick up or step on the creatures will experience their fiery sting.

A blue dragon’s striking blue looks lead some people to consider adding them to a home aquarium. Fortunately, these creatures aren’t readily available for purchase because they don’t make good pets. Because of their dietary needs, it is impossible to find food for them at a pet store. The other more obvious issue is that powerful sting. Even the most experienced aquarium keepers pass on adding these nudibranchs to their setup.

All blue dragons are hermaphrodites, meaning they have both male and female reproductive organs. When two blue dragons mate, they engage carefully with long, curved, almost S-shape bends in their penises. Their long anatomy keeps them from being stung by their partner. This mating results in strings of 20 eggs that the slug lays on floating objects such as driftwood or the floating carcass of their prey.

6. They Are Showing Up in Unexpected Locations

In many locations worldwide, blue dragons are being spotted for the first time. This may be because the warming ocean, combined with increased storm activity, results in them floating farther and/or into different coastlines. It may also be relateed to cyclical changes in Portuguese man o’ war populations. Researchers revised the range of blue dragons 93 miles farther north into the Bay of California after fishers netted them as part of their catch in 2015. In 2017, they were spotted in the waters of Taiwan. In May 2020, they surprised beachgoers in South Padre Island, Texas, and then again in Cape Town, South Africa, in November of that year.