The Huntsman Spider is a common name given to the family ‘Sparassidae’. The larger specimens of these spiders are called ‘Wood Spiders’ in most parts of Australia, due to their common preference for inhabiting woody places. Huntsman Spiders are a diverse and relatively harmless group of spiders, with 13 genera and 94 described species. 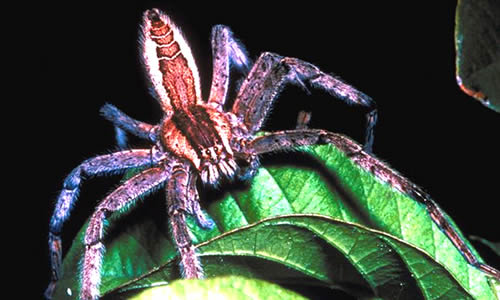 The eyesight of the Huntsman Spider is not nearly as good as that of the Jumping Spiders (Salticidae). However, their vision is quite sufficient to detect approaching humans or other large animals from some distance.

The Banded Huntsman Spider (Holconia) is large and grey to brown with striped bands on its legs. The Badge Huntsman (Neosparassus) is larger still and brown and hairy. Its bite will inflict the worst injury and local swelling and pain may cause nausea, headache, vomiting and heart palpitations. The Tropical or Brown Huntsman (Heteropoda) is also large and hairy, with mottled brown, white and black markings.

Huntsman Spiders are found in Australia, New Zealand, Southeast Asia, the Mediterranean, Florida and Hawaii and possibly in many other tropical and semi-tropical regions. Adult Huntsman spiders do not build webs, however, they hunt and forage for food.

Huntsman Spiders are found living under loose bark on trees, in crevices on rock walls and in logs, under rocks and slabs of bark on the ground and on foliage. Dozens of the social huntsman species, (Delena cancerides), can be seen sitting together under bark on dead trees and stumps, however, they can also be found on the ground under rocks and bark slabs. Badge Huntsman Spiders are often found on foliage, however, some woodland species are burrow builders, with and without trapdoors. Huntsman spiders of many species sometimes enter houses. Huntsman Spiders are also notorious for entering cars and being found hiding behind sun visors or running across the dashboard.

The diet of the Huntsman spider consists of insects and other invertebrates.

Males of Heteropoda venatoria, one of the Huntsman spiders, have recently been found to deliberately make a sound when they are given reason to believe that females of their species are nearby. These spiders have a lengthy courtship and the male is rarely attacked after mating, unlike some other species of spider. In fact, many huntsman spiders live peacefully together in large colonies.

The female Huntsman produces a flat, oval egg sac of white papery silk and lays up to 200 eggs. She then places it under bark or a rock and stands guard over it, without eating, for about 3 weeks. During this period the female can be quite aggressive and will rear up in a defensive display if provoked. Some species will even carry their egg sac under their bodies while moving about. Delena females lay a ground-sheet of silk upon which the egg sac is anchored while the eggs are laid into it. They will then complete her egg sac and pick it up, leaving the silk ground-sheet behind. Incubation periods vary and are probably influenced by climatic conditions.

In some cases (Isopeda), the female may moisten and tear the egg sac open, helping her spiderlings to emerge. The mother stays with them for several weeks. Young Huntsman spiders are pale, with the young of Neosparassus often being green in colour. They undergo several molts while still with their mother, hardening to a darker brown and eventually disperse.

Huntsman spiders, like all spiders, molt in order to grow and often their old skin may be mistaken for the original spider when seen suspended on bark or in the house. The life span of most Huntsman species is about 2 years or more.

In general, Huntsman spiders are not regarded as dangerous and can be considered beneficial because they feed on insects (Many Australians will relocate Huntsmen to the garden rather than kill them).

However, Huntsman spiders give bites that have caused prolonged pain, inflammation, headache, vomiting and irregular pulse rate. However, a scientific study into the bite of these spiders did not note any severe or unusual symptoms resulting from confirmed bites. It is unclear under what circumstances these spiders bite people, however, it is known that female members of this family will aggressively defend against perceived threats to their egg sacs and their young.

Subscribe for more awesome critter battles from Monster Bug Wars
★ YouTube Channel: https://www.youtube.com/channel/UCaL6Fn_Exyfe2tzBMI4cHVw/featured
★ WHAT is Monster Bug Wars?
This is ringside access to bugeatbug gladiatorial contests! Witness some of nature’s deadliest encounters where stings, spikes and deadly venom are wielded with coldblooded precision.
★ Who will you encounter?
Enter the noholdsbarred, reallife world of spiders, scorpions, centipedes and killer ants fighting to the death. When the Spiny Leaf Insect goes head to head with the Giant Rainforest Mantis it’s an allout assault where only one survives.
Can the lethal stinger of a Bull Ant overcome the suffocating silk of the Redback Spider?
When a lethal Tree Scorpion threatens a Green Ant colony carnage is certain.
Who survives the showdown between a deadly Desert Centipede and a Desert Trapdoor spider?

10 most dangerous spiders in the world