Some of Australia’s most striking bird species are lorikeets. There are (currently) seven lorikeet species recognised in Australia, all of which are well established in Aviculture.

In this article, we look at the challenges of keeping lorikeets compared to regular parrots, and share some practical advice for those wanting to get started. 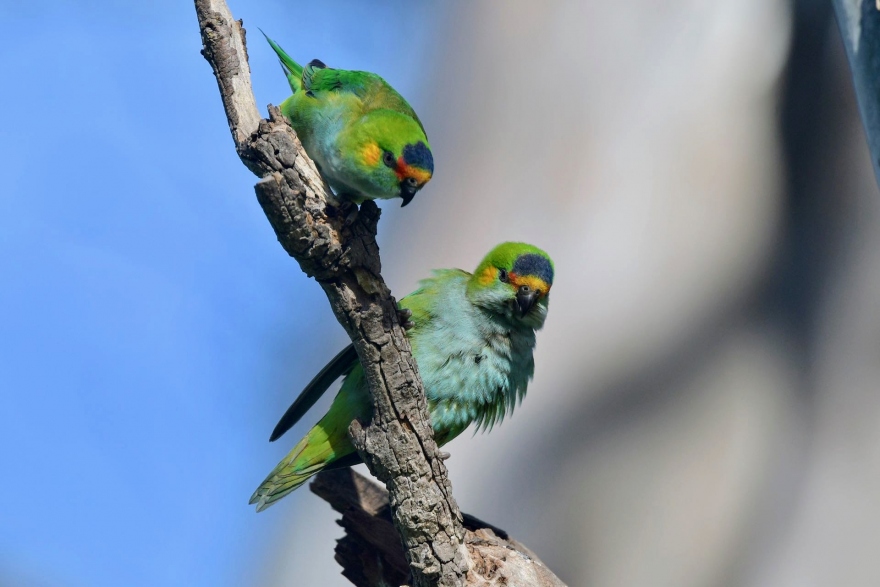 Feeding for regular parrots is a “set and forgot” affair. A keeper can get away with feeding their granivorous parrots just once or twice a week, as a dish of uneaten seeds and nuts will last for a long time. With good portion control, fresh foods like fruits and veggies can also be offered to regular parrots with little concern for spoilage.

Lorikeet feeding is nowhere near that straightforward. Wet food mixes will last a day at most, unless you’re in a warm or humid climate where wet food will need to be replaced twice a day.

Lorikeet dry food might last for two days if you’re lucky, but many lorikeets will spoil it much faster than that by adding water or other wet foods to the mix.

Lorikeets have a high moisture diet that’s loaded with sugar, which means they produce an enormous volume of wet and stick faeces.

If their aviary isn’t cleaned often enough, bacterial and fungal infections can thrive. You should try to keep the aviary floors as clean and dry as possible, which means the aviary needs to have excellent drainage and a substrate that doesn’t hold much water.

A concrete aviary floor topped with a fine layer of course sand works reasonably well for lorikeets, as the substrate can be swept, discarded, and replaced with relative ease and minimal expense.

The issue with voluminous liquid poo also affects the lorikeet’s nests. When breeding, it’s a good idea to drill some holes into the bottom of the nest box so that moisture can escape.

Lorikeet food (and ultimately their poo) is absolutely loaded with sugars. Many species of ants—and other insects—absolutely love sugar and will swarm towards your lorikeet aviary in huge numbers.

Ants in the lorikeet food mixes is mostly just an annoyance, but when they get into the lorikeet nests they become a real danger. The poo of new hatched chicks is just as sweet tasting as their parents, but they have no ability to defend themselves against ants that are interested in more than just sugar.

Although it’s not strictly made for aviary use, one product that seems to keep ants out of the aviary is coopex. 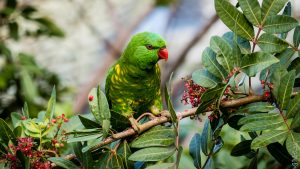 Varied Lorikeet
Arguably the rarest Australian lorikeet in aviculture, the varied lorikeet is a smaller species originating from the tropical eucalyptus forests of northern Australia.

Musk Lorikeet
Musk Lorikeets are a medium-sized member of the lorikeet family, common in southern and eastern Australia. Although not kept in large numbers, they’re excellent as pets or in an aviary. Possibly the most beginner-friendly lorikeet.

Musk Lorikeet
Purple-crowned lorikeets are found in the southernmost parts of mainland Australia. They’re one of the more challenging species of native lorikeets in aviculture. They’re also very short-lived for a parrot, with a lifespan of only 7-9 years.
More Information

Rainbow Lorikeet
Rainbow lorikeets are the most abundant lorikeet in Australia, occurring virtually everywhere. They’re likely the most commonly kept lorikeet, however their larger size, loud screech, and especially messy habits can make them frustrating for beginners.

Little Lorikeet
Found in Australia’s south-eastern forests, the little lorikeet is by far the smallest of the Australian lorikeet species. Like the purple-crowned lorikeet, they’re uncommon in aviculture due to how challenging they are to keep and breed.
More Information

There are special considerations to be made when designing an aviary for lorikeets. Their housing needs to be easy to clean, their food needs to be easily accessible for frequent changes, and their playful nature needs to be satiated with enrichment items like flowering eucalyptus branches and swinging perches.

Suspended aviaries work particularly well for lorikeets, as the design allows droppings to fall through the bottom to where they will no longer cause hygiene issues. If keeping up with the intense cleaning requirements of lorikeets in a traditional aviary becomes overwhelming, switching to a suspended aviary can help a lot.

There are, of course, drawbacks to housing lorikeets in a suspended aviary. Suspended aviaries are often (but not always!) smaller than a traditional aviary, which is problematic for extremely energetic species like lorikeets that enjoy having as much space as you give them. You also can’t plant them out as easily.

Can you mix lorikeets with other species?

Different lorikeet species should not be housed together, as hybridization can occur.

The larger lorikeet species—rainbow lorikeets, musk lorikeets, and scaly-breasted lorikeets—are best suited to one pair per aviary. In a large enough aviary, they can be housed as a small colony, however aggression can become an issue during the breeding season.

The smaller lorikeet species—purple crowned, little, and varied—can be housed in a small colony. In a really large aviary, they can even be part of a mixed collection of finches, quail, doves, and other small placid parrots.

Which lorikeet species should I start with?

Musk Lorikeets are arguably the species best suited to beginners. They’re hardy, quite small (but not so small they’re fragile), inexpensive, relatively quiet, and easy to breed.

Rainbow lorikeets and scaly-breasted lorikeets are also excellent choices, but keep in mind that they’re larger, more active, and louder than musk lorikeets.

Little lorikeets, varied lorikeets, and purple-crowned lorikeets are stunning little birds, but they’re quite expensive, somewhat short-lived, and arguably too fragile for someone just getting started with lorikeets.

Noisy, hungry Australian Rainbow Lorikeets at our window. Support me on Patreon https://www.patreon.com/Oztralien

Are daddy long legs poisonous? the truth about their venom

Ugly flowers in the world