By the end of this section, you will be able to:

Asexual reproduction occurs in prokaryotic microorganisms (bacteria and archaea) and in many eukaryotic, single-celled and multi-celled organisms. There are several ways that animals reproduce asexually, the details of which vary among individual species.

Fission, also called binary fission, occurs in some invertebrate, multi-celled organisms. It is in some ways analogous to the process of binary fission of single-celled prokaryotic organisms. The term fission is applied to instances in which an organism appears to split itself into two parts and, if necessary, regenerate the missing parts of each new organism. For example, species of turbellarian flatworms commonly called the planarians, such as Dugesia dorotocephala, are able to separate their bodies into head and tail regions and then regenerate the missing half in each of the two new organisms. Sea anemones (Cnidaria), such as species of the genus Anthopleura (Figure 13.2), will divide along the oral-aboral axis, and sea cucumbers (Echinodermata) of the genus Holothuria, will divide into two halves across the oral-aboral axis and regenerate the other half in each of the resulting individuals. 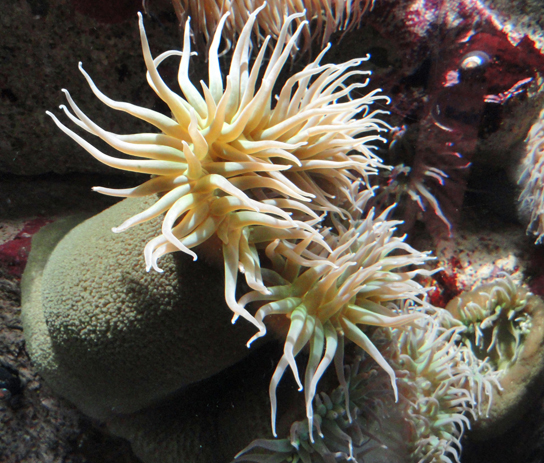 Budding is a form of asexual reproduction that results from the outgrowth of a part of the body leading to a separation of the “bud” from the original organism and the formation of two individuals, one smaller than the other. Budding occurs commonly in some invertebrate animals such as hydras and corals. In hydras, a bud forms that develops into an adult and breaks away from the main body (Figure 13.3).

View this video to see a hydra budding.

Fragmentation is the breaking of an individual into parts followed by regeneration. If the animal is capable of fragmentation, and the parts are big enough, a separate individual will regrow from each part. Fragmentation may occur through accidental damage, damage from predators, or as a natural form of reproduction. Reproduction through fragmentation is observed in sponges, some cnidarians, turbellarians, echinoderms, and annelids. In some sea stars, a new individual can be regenerated from a broken arm and a piece of the central disc. This sea star (Figure 13.4) is in the process of growing a complete sea star from an arm that has been cut off. Fisheries workers have been known to try to kill the sea stars eating their clam or oyster beds by cutting them in half and throwing them back into the ocean. Unfortunately for the workers, the two parts can each regenerate a new half, resulting in twice as many sea stars to prey upon the oysters and clams.

Parthenogenesis is a form of asexual reproduction in which an egg develops into an individual without being fertilized. The resulting offspring can be either haploid or diploid, depending on the process in the species. Parthenogenesis occurs in invertebrates such as water fleas, rotifers, aphids, stick insects, and ants, wasps, and bees. Ants, bees, and wasps use parthenogenesis to produce haploid males (drones). The diploid females (workers and queens) are the result of a fertilized egg.

Some vertebrate animals—such as certain reptiles, amphibians, and fish—also reproduce through parthenogenesis. Parthenogenesis has been observed in species in which the sexes were separated in terrestrial or marine zoos. Two female Komodo dragons, a hammerhead shark, and a blacktop shark have produced parthenogenic young when the females have been isolated from males. It is possible that the asexual reproduction observed occurred in response to unusual circumstances and would normally not occur.

Sexual reproduction is the combination of reproductive cells from two individuals to form genetically unique offspring. The nature of the individuals that produce the two kinds of gametes can vary, having for example separate sexes or both sexes in each individual. Sex determination, the mechanism that determines which sex an individual develops into, also can vary.

Hermaphroditism occurs in animals in which one individual has both male and female reproductive systems. Invertebrates such as earthworms, slugs, tapeworms, and snails (Figure 13.5) are often hermaphroditic. Hermaphrodites may self-fertilize, but typically they will mate with another of their species, fertilizing each other and both producing offspring. Self-fertilization is more common in animals that have limited mobility or are not motile, such as barnacles and clams. Many species have specific mechanisms in place to prevent self-fertilization, because it is an extreme form of inbreeding and usually produces less fit offspring.

Mammalian sex is determined genetically by the combination of X and Y chromosomes. Individuals homozygous for X (XX) are female and heterozygous individuals (XY) are male. In mammals, the presence of a Y chromosome causes the development of male characteristics and its absence results in female characteristics. The XY system is also found in some insects and plants.

Bird sex determination is dependent on the combination of Z and W chromosomes. Homozygous for Z (ZZ) results in a male and heterozygous (ZW) results in a female. Notice that this system is the opposite of the mammalian system because in birds the female is the sex with the different sex chromosomes. The W appears to be essential in determining the sex of the individual, similar to the Y chromosome in mammals. Some fish, crustaceans, insects (such as butterflies and moths), and reptiles use the ZW system.

Individuals of some species change their sex during their lives, switching from one to the other. If the individual is female first, it is termed protogyny or “first female,” if it is male first, it is termed protandry or “first male.” Oysters are born male, grow in size, and become female and lay eggs. The wrasses, a family of reef fishes, are all sequential hermaphrodites. Some of these species live in closely coordinated schools with a dominant male and a large number of smaller females. If the male dies, a female increases in size, changes sex, and becomes the new dominant male.

External fertilization usually occurs in aquatic environments where both eggs and sperm are released into the water. After the sperm reaches the egg, fertilization takes place. Most external fertilization happens during the process of spawning where one or several females release their eggs and the male(s) release sperm in the same area, at the same time. The spawning may be triggered by environmental signals, such as water temperature or the length of daylight. Nearly all fish spawn, as do crustaceans (such as crabs and shrimp), mollusks (such as oysters), squid, and echinoderms (such as sea urchins and sea cucumbers). Frogs, corals, mayflies, and mosquitoes also spawn (Figure 13.6). 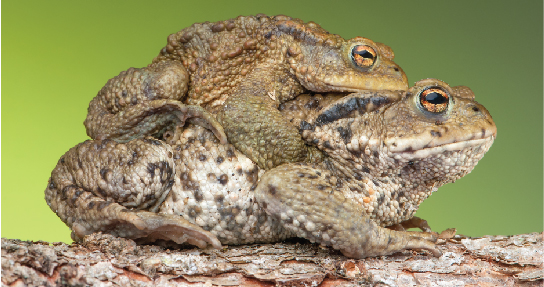 Internal fertilization occurs most often in terrestrial animals, although some aquatic animals also use this method. Internal fertilization may occur by the male directly depositing sperm in the female during mating. It may also occur by the male depositing sperm in the environment, usually in a protective structure, which a female picks up to deposit the sperm in her reproductive tract. There are three ways that offspring are produced following internal fertilization. In oviparity, fertilized eggs are laid outside the female’s body and develop there, receiving nourishment from the yolk that is a part of the egg (Figure 13.7 a). This occurs in some bony fish, some reptiles, a few cartilaginous fish, some amphibians, a few mammals, and all birds. Most non-avian reptiles and insects produce leathery eggs, while birds and some turtles produce eggs with high concentrations of calcium carbonate in the shell, making them hard. Chicken eggs are an example of a hard shell. The eggs of the egg-laying mammals such as the platypus and echidna are leathery.

In ovoviparity, fertilized eggs are retained in the female, and the embryo obtains its nourishment from the egg’s yolk. The eggs are retained in the female’s body until they hatch inside of her, or she lays the eggs right before they hatch. This process helps protect the eggs until hatching. This occurs in some bony fish (like the platyfish Xiphophorus maculatus, Figure 13.7 b), some sharks, lizards, some snakes (garter snake Thamnophis sirtalis), some vipers, and some invertebrate animals (Madagascar hissing cockroach Gromphadorhina portentosa).

In viviparity the young are born alive. They obtain their nourishment from the female and are born in varying states of maturity. This occurs in most mammals (Figure 13.7 c), some cartilaginous fish, and a few reptiles.

Reproduction may be asexual when one individual produces genetically identical offspring, or sexual when the genetic material from two individuals is combined to produce genetically diverse offspring. Asexual reproduction in animals occurs through fission, budding, fragmentation, and parthenogenesis. Sexual reproduction may involve fertilization inside the body or in the external environment. A species may have separate sexes or combined sexes; when the sexes are combined they may be expressed at different times in the life cycle. The sex of an individual may be determined by various chromosomal systems or environmental factors such as temperature.

Sexual reproduction starts with the combination of a sperm and an egg in a process called fertilization. This can occur either outside the bodies or inside the female. The method of fertilization varies among animals. Some species release the egg and sperm into the environment, some species retain the egg and receive the sperm into the female body and then expel the developing embryo covered with shell, while still other species retain the developing offspring throughout the gestation period.

asexual reproduction: a mechanism that produces offspring that are genetically identical to the parent

budding: a form of asexual reproduction that results from the outgrowth of a part of an organism leading to a separation from the original animal into two individuals

fission: (also, binary fission) a form of asexual reproduction in which an organism splits into two separate organisms or two parts that regenerate the missing portions of the body

fragmentation: the breaking of an organism into parts and the growth of a separate individual from each part

hermaphroditism: the state of having both male and female reproductive structures within the same individual

oviparity: a process by which fertilized eggs are laid outside the female’s body and develop there, receiving nourishment from the yolk that is a part of the egg

ovoviparity: a process by which fertilized eggs are retained within the female; the embryo obtains its nourishment from the egg’s yolk, and the young are fully developed when they are hatched

parthenogenesis: a form of asexual reproduction in which an egg develops into a complete individual without being fertilized

sex determination: the mechanism by which the sex of individuals in sexually reproducing organisms is initially established

viviparity: a process in which the young develop within the female and are born in a nonembryonic state

Living beings are not immortal. So in order to continue the existence of species, there has to be some process. This process that helps in giving rise to similar individuals from the existing ones is called Reproduction.
To learn more about Reproduction, enrol in our full course now: https://bit.ly/ReproductionInAnimalsG8
To watch more videos related to biology, click here: https://bit.ly/Biology_DMYT
Don’t Memorise brings learning to life through its captivating educational videos. To Know More, visit https://DontMemorise.com
New videos every week. To stay updated, subscribe to our YouTube channel : http://bit.ly/DontMemoriseYouTube
Register on our website to gain access to all videos and quizzes:
http://bit.ly/DontMemoriseRegister